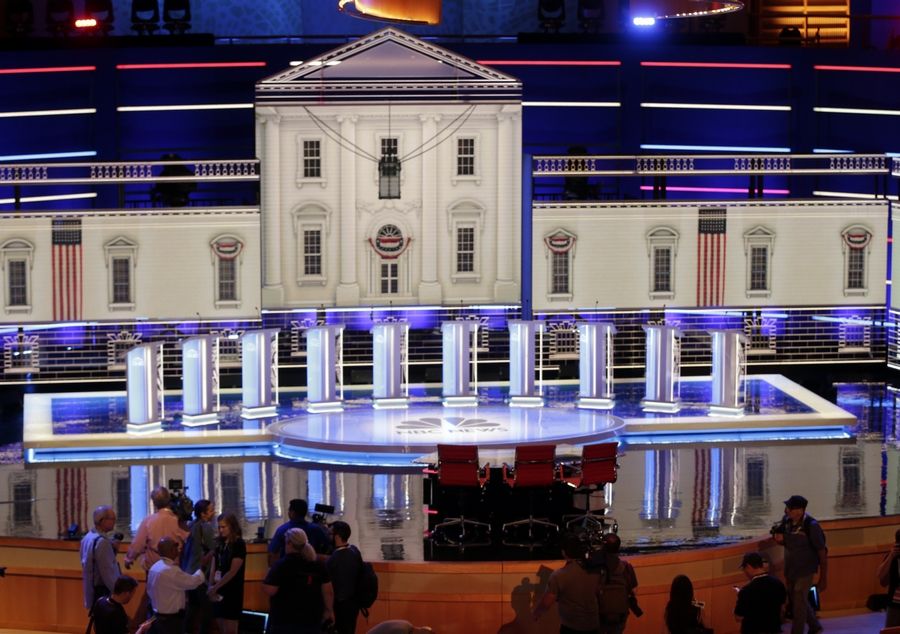 Democratic candidates will take the debate stage on Sept. 12.

There were 26 Democratic presidential candidates at the start of the summer. It is now September and the race has narrowed down to 20 candidates, only 10 of which have qualified for the third round of debates set for Texas Southern University on Sept. 12. We have everything you need to know to get up to speed before Thursday night.

The 20 candidates met the qualifications set by the Democratic National Committee (DNC) for the June and July debates. Each of these debates was split up into two nights, featuring 10 candidates per night.

Just a few days before the June debates kicked off, former Vice President Joe Biden, the Democratic front-runner, was challenged by Senators Cory Booker and Kamala Harris–the two black candidates in the race–for his controversial comments about the relationship he had with segregationist senators.

The first round of Democratic primary debates, held in June, came with many surprises. Sen. Elizabeth Warren of Massachusetts dominated the first night of debates as well as former Secretary of Housing and Urban Development Julián Castro, who made a strong showing, boosting his name recognition and his performance in the polls. As the only Hispanic-American candidate in the race, Castro has made immigration policy the central issue of his campaign. Castro’s plan touches on everything from a path to citizenship for Dreamers to improving diplomatic relations with Latin American countries. On the other hand, former U.S. Representative Beto O’Rourke failed to carry the energy from his exciting senate run last fall over to his presidential campaign.

Sen. Harris took the opportunity on the second night of the June debates to challenge Biden’s record on busing, a racial segregation issue that personally affected her as a child. This proved to be a breakout moment for Harris. In the days that followed, surveys showed a jump in her poll numbers, and a drop in Biden’s that he has since recovered from.

In the weeks leading up to the second round of debates held in Detroit on July 30 and 31, California Rep. Eric Swalwell opted to drop out of the race after his campaign failed to gain traction.

The first night of the July debates was controlled by Senators Sanders and Warren, who stood their ground on progressive policy ideas and fended off criticism from the more moderate candidates. Candidates clashed over healthcare and Sanders’ proposed Medicare-for-All bill, agreeing for the most part that healthcare is a right that all Americans are entitled to, but disagreeing about how to go about reforming the current Medicare system.

On the second night of the July debates, multiple senators directly confronted the ideas and track-record of former Vice President Biden in hopes of putting a dent in his status as the Democratic front-runner.

Harris touted her record as a prosecutor and as the Attorney General of California, making the case that she had the experience and the skills to go after President Donald Trump for his alleged crimes. Opposition to Harris’ work as Attorney General came from Hawaii Rep. Tulsi Gabbard, who condemned her record.

The mass shootings on Aug. 3 and 4 in El Paso, TX and Dayton, OH, respectively, prompted each of the Democratic presidential hopefuls to once again call for “common-sense” gun reform. While the vast majority of Americans support background checks, gun control is an hot-topic debate issue.

New York Senator Kirsten Gillibrand suspended her presidential campaign, along with Governors Jay Inslee and John Hickenlooper, former Senator Mike Gravel, and Representatives Eric Swalwell and Seth Moulton. Gillibrand’s decision was prompted by her failure to meet both the donor and polling thresholds to qualify for the September debates.

On the Republican side of the aisle, former Massachusetts Governor Bill Weld and former Representatives Joe Walsh (R-IL) and Mark Sanford (R-SC) have announced that they will challenge the current president for the Republican nomination.

As President Trump has the support of the Republican National Committee and a high approval rating among Republicans, it will likely be a challenge for any of the new candidates to win the Republican nomination.

While some states support the president’s re-election, others are working against it. Republican parties in several states have already cancelled their primary contests in a show of support for the president’s re-election. In contrast, in July, Gov. Gavin Newsom (D-CA) signed into law a bill that would require U.S. presidential candidates to release five years of tax returns before they can appear on the state’s ballot.This law would have prevented President Trump from appearing on the ballot, as he did not release his tax returns.

Former Vice President Biden, along with Senators Warren and Sanders, are the only three candidates polling in the double digits. Rep. Moulton (D-MA) commented that the battle for the Democratic nomination has essentially become a “three-way race” between Biden, Warren and Sanders. Since entering the race, Biden’s lead in the polls has been shrinking, while Warren, who is regarded as a liberal populist, has been making significant gains.

The 10 candidates who have qualified for the presidential debate set for Sept. 12 also debated in a CNN Town Hall last week to lay out their solutions to the climate crisis. The town hall, along with the upcoming debates, will hopefully give viewers more insight into who voters might choose to go up against Trump in the general election next November.