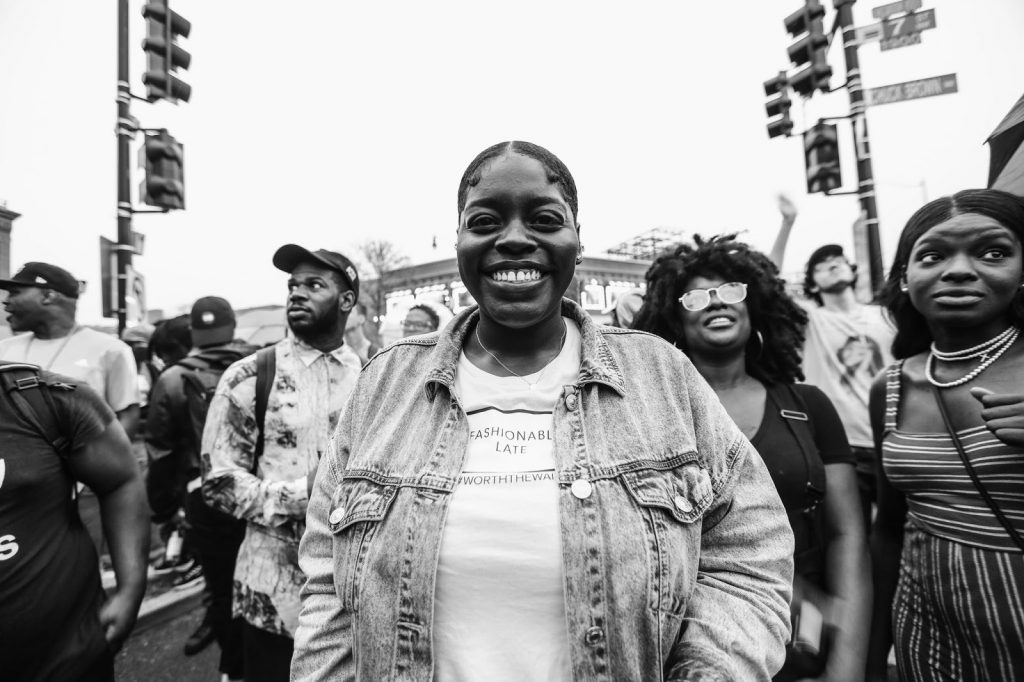 Early April, a resident of The Shay luxury apartments on the corner of Florida Avenue and 7th Street Northwest has clashed with native Washingtonians over the almost 25-year tradition of go-go music being played from speakers outside of the MetroPCS store. The block is named after Chuck Brown, the man who was dubbed “The Godfather of Go-Go.”

The conflict has sparked the “Don’t Mute DC” movement, which was initiated by Howard senior Julien Broomfield with a tweet posted on Sunday, April 7. On Monday, April 8, Broomfield along with a crowd of supporters took to the streets for a protest outside of the MetroPCS. Among those in attendance were Councilmember-at-large Robert White Jr., Ward 1 Councilmember Brianne Nadeau and community activist and co-founder of “Peaceoholics” Ronald Moten.

Donald Campbell, the owner of the store, was asked by T-Mobile, the owners of MetroPCS, two weeks ago to bring the go-go into the store. The change stemmed from a noise complaint from a resident of The Shay, who threatened to take legal actions against the corporation. According to D.C. Police, there have been no recent noise complaints originating from the store, while three have been filed with the Department of Consumer and Regulatory Affairs since 2010.

Some, however, have shown support for T-Mobile’s decision including Anita Norman, Howard alumna and Advisory Neighborhood Commissioner for 1B01; who was relieved to hear that the music was moved inside of the store. She too associated the music with loud noise levels that impaired her blind constituents from hearing the beep that prompts them when to cross the street.

Others believe that they can find a remedy to the auditory concerns experienced at the crosswalk, as opposed to muting Campbell. On April 8, Councilwoman Nadeau contacted T-Mobile in a letter written to Kathleen Ham, Senior Vice President of Government Affairs for the company regarding the matter. In a tweet addressing the overall issue, Nadeau said, “This is so frustrating. People have complained to me about this over the years, but I’ve always said that a small business playing go-go in Ward 1 is a thing we should celebrate. They only do it during business hours, and there are always people outside enjoying it.”

The issue is being framed as a matter of gentrification. The racially-charged tone of the conversation has added to the controversy. Once known as “Chocolate City,” D.C,’s black population made up 71.1 percent of the city’s overall population in 1970; compared to 47.1 percent in 2017. Many are saying that the situation is not merely about the volume of the music, but rather an axiomatic example of one of the many detrimental byproducts of gentrification: cultural erasure. As Natalie Hopinkson, Howard professor and author of “Go-Go Live: The Musical Life and Death of a Chocolate City” wrote in a 2010 Washington Post article, “Without go-go, Washington loses part of its soul and continues its steady march toward becoming richer, whiter — less funktified.”

Broomfield, a graduating senior English major, who was made aware of the absence of go-go music outside of the MetroPCS by a friend, is overjoyed with the outcome of her tweet. Hailing from Newark, New Jersey, Broomfield remembers first hearing go-go music and “the joy that comes with it” outside of the MetroPCS in fifth grade when she visited Howard on a school trip.

Having participated in various community activism and service outreaches before “DontMuteDC,” including being an Americorps member, attending the Women’s and Breast Cancer marches and being active in board meetings in her hometown of Newark, she is a devout believer of advocacy. Broomfield was, however, surprised to see the response that her tweet received being that she often tweets about injustices and has never received a response akin to that of her “DontMuteDC” tweet.

“D.C. is a large scale representation of what is going to happen to Newark. When my tweet got the attention it did, I realized that I now had a platform and needed to use it,” Broomfield said.

She went on to say that her Howard experience has shaped the woman that she is today.

“Howard gave me my voice”, said Broomfield. Upon graduating, she hopes to go back to Newark and work at her old middle or high school, pursue modeling and eventually become a travel writer.

“I just want to continue to push the agenda that equality is a real thing and we can achieve it,” said Broomfield.

On Tuesday, April 9, a second protest occurred on the U Street corridor,  this time it was a live go-go protest with rapper Wale and go-go band TOB coming out to perform.

“I’ve looked into this issue myself and the music should NOT stop in D.C.,” he wrote. “@TMobile and @MetroByTMobile are proud to be part of the Shaw community– the music will go and our dealer will work with the neighbors to compromise volume.”