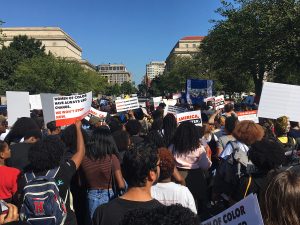 Saturday, Sept. 29th, Black women rallied on the National Mall to demand a seat at the table during the March for Black Women. Organized by the Black Women’s Blueprint, the march focused on giving voice to the traditionally silenced pleas of Black women and demanded political leaders take responsibility for the blatant injustices inflicted on the Black female community in America.

A considerable amount of Howard students showed their support for the cause, arriving at the protest with some signs highlighting the prominent Black women who graduated from Howard University and others with a simple message, “Black girls matter.”

“I’m here to denounce the notion that boys will be boys, and that we live in a man’s world,” said Morgan Gibson, freshman chemical engineering major.

In addition to the many women who participated in the march, a number of men found themselves compelled to join the protest.

“This country doesn’t prioritize the importance of black women in our lives. Black women are crucial in creating life, encouraging and strengthening black men as well as themselves in the black community,” said Avery Brown, junior chemical engineering major.

One of the major topics that formed the foundation of the march was the disproportionate rate at which Black women face assault. Many posters and signs expressed frustration with the reality that black women are more likely to be subjected to unprecedented sexual violence.

In addition to the march, there were a number of human rights speakers. Camila Newton, civil rights activist and co-chair to the ‘March for Survivors,’ delivered a particularly powerful message, sharing not only her personal experience with sexual assault but taking time to comment on the current state of sexual violence in the country.

“This country’s incessant glorification of the patriarchy and making light of rape culture, is literally killing us. The stench left behind by ‘boys will be boys’ has sealed many fates and many caskets,” said Newton.

“Last week was an example of patriarchy at its worst: unmasked, unleashed, privilege on steroids; but we are here today, strong unbowed, and unapologetic,” said Jacobs.

Her message, along with many others that day, revitalized the politically weary crowd of activists, students, allies and community organizers, to continue battling for the justice Black women deserve.

Howard Announces It Will Finish The Spring 2022 Semester Virtually

Howard University will host classes and finals online for the last two weeks of the semester. This will take effect on April 14.