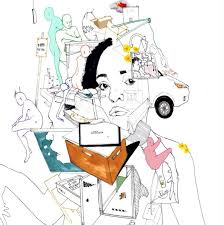 Fatimah Warner, better known by her stage name Noname, has created a new work of art with her album ‘Room 25’. The rapper’s long awaited sophomore album was released September 14th and features cover art by Bryant Giles. The 26-year-old Chicago native walks us through her journey as she moves to California, discovers a new world and hones in on a new sense of self.  Room 25 serves as a coming of age story poured over melodies and delivered in a tone Noname herself refers to as “lullabye rap”. She delivers the harshest of messages through her soft, mellow tones and is unafraid to delve into darker spaces. On “Blaxploitation,” we are greeted by sampled shouts plucked from the 1970s film genre of the same name. Noname enters and begins to explore stereotypes and experiences associated with Blackness and how they have impacted her. She refers to herself as “insomni-black”, a play on the word “insomniac” and points to “bad sleep triggered by bad government” as the reason behind her restlessness. In a time where we can be easily overwhelmed by the politicization of Blackness in every visible sphere, it is almost comforting to know that even our favorite artists are grappling with sleepless nights.

There is an air of confidence that comes through clearly on the album’s first track and is carried throughout the record’s entirety. We are listening to a Noname that sounds as though is secure and more sure of her musical abilities than ever. She has recently moved to California and, through Room 25, we are given access to her diary as she travels through life in this new space. Fast paced quips and critiques on Los Angeles culture and the materialistic viewpoints that the city is famed for shine through in littered encounters throughout “Prayer Song”. We follow Noname as she struggles to remain as true to herself as she can through this shift of life. On “Windows” we are instructed to “quit looking out the window” and “go find yourself” hinting further at the constant gaze we have on each other that is heightened in a place like Los Angeles. The words “I have to focus on the part of me that I’m trying to feed. I can’t pretend I’m not myself” are echoed throughout “Part of Me”, an ode to self love. These lyrics reinforce the idea that selfhood and a journey towards self-discovery are the driving forces behind the album.

In our current political climate it is refreshing and, in a way, revolutionary to hear a Black woman focusing on selfhood and self love. The process of discovering who we are in this world is hard enough without the added pressure of navigating as a Black woman. Often we can feel as though young adult angst and self awareness must be put on the back burner to focus on more pressing political and social issues. Room 25 reminds us that one cannot exist without the other. It is possible to be Black, a woman, an artist and perfecting yourself all at once.