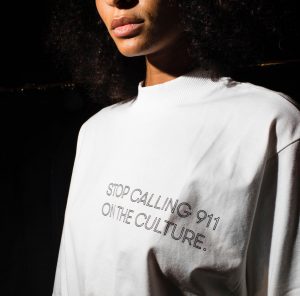 As a firm believer in political fashion statements, I couldn’t wait to see what this year’s New York Fashion Week had in store for this volatile political and cultural era. Fortunately, fashion’s ability to make a statement was not lost on this year’s NYFW. From the “STOP CALLING 911 ON THE CULTURE” t-shirt Pyer Moss premiered on the runway, to the’ “TELL YOUR SENATOR NO ON KAVANAUGH” t-shirt Jeremy Scott wore to his presentation, we’ve certainly seen fashion with a message this year.

Kerby Jean-Raymond’s “American, Also: Lesson 2,” collection for Pyer Moss was reminiscent of a stroll through a Black art museum, complete with garments depicting Black faces worn on Black bodies and pieces reading “FUBU.” This collection, which included the “STOP CALLING 911 ON THE CULTURE” t-shirt, was presented Sept. 8.

21-year-old model, Indira Scott, has grabbed the attention of critics, designers and hair stylists with her long box braids. The hairstyle has been solidified as the model’s signature this week and landed her shows such as Matthew Adams Dolan, Dion Lee, Prabal Gurung, and Ralph Lauren.

Hip-hop culture specifically has seen some appreciation at this year’s NYFW as rapper, Offset, got a chance to make his runway debut for Jeremy Scott. Like her husband, Cardi B also had a notable week. She received a lipstick in her name from Tom Ford Beauty’s “Boys and Girls” collection, despite a physical altercation with Nicki Minaj taking place at a Fashion Week event.

Rihanna also had a big week as Savage x Fenty made its Fashion Week debut on Sept. 12. The pieces presented in the show were also made immediately available for purchase following the show.

However, what really resonated with fan’s was Beyoncè’s Vogue cover. This was her second time gracing the cover of Vogue’s September issue, but unlike the first cover this one included a rare and intimate cover story.

With each collection, show or piece a company uses to take a stand or celebrate Black culture, they acknowledge that minorities, specifically Black people, have a well deserved place within the fashion industry.