In the case of the September 2018 covers of major fashion magazines, fashion may be making diversity strides. Beyoncé covers American Vogue, Rihanna is on the British Vogue cover, Slick Woods is on American Elle, Tracee Ellis Ross is on Elle Canada and Lupita Nyong’o covers Porter.

It’s flattering that the faces of black women gloss the covers that represent a new lead in style and high-fashion trends. The question now is: Do these covers really represent moving forward for black women and their indisputable mark on the industry? 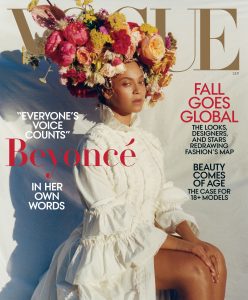 If it wasn’t for Beyonce’s deliberate artistic direction, would Vogue have felt compelled enough to allow an African American photographer, Tyler Mitchell, to shoot a cover?

The intentions behind these September issues may be questionable. Nonetheless, to be living, and still flourishing, during the Trump era, makes seeing our sisters on the front covers refreshing in a world that continues to take so much from, and out of, the black woman.

America’s signature exploitation of the black woman, for her style, her physical features, down to the men that she brings into the world, has never left any room for her to easily leave her complete trust in anyone but herself. She’s a fighter, a nurturer, and naturally the most responsible for the continuous practices of black culture. It’s in these things that we see the true beauty of black women outshine her stunning images in magazines.

Anna Julia Cooper, a mother of black feminism, wrote, “only the black woman can say when and where I enter, in the quiet, undisputed dignity of my womanhood, without violence and without suing or special patronage, then and there the whole Negro race enters with me.” Even then in 1892, the beauty of a black woman could be seen in her strength and responsibility to her people.

This alone is what has black women celebrating and feeling good to see Lupita’s fresh cut on the cover of Porter, Slick Wood’s bare baby belly on ELLE, and Beyonce’s story about life and love after giving birth to twins. These covers made a way to show that strength inside black women, while putting their outer beauty on display.

Still, questions remain unanswered. Why is it taking so long for black women to enter into all aspects of American life? And when will we do so altogether?

Vogue’s very first issue was released in 1892, the same year as Anna Julia Cooper’s A Voice from the South, but has managed somehow with 126 years to not have a single black photographer shoot the cover. It’s facts like this that leave some black women, though overjoyed by brown beauty making prestigious covers, left provoked and still unsure if black women have really entered.

If not now, when? Cooper said, “only the black woman can say when and where.” For our sake, we say here and now.