After a little over a year since announced that Howard University decided that it would participate in the Federal Communication Commission’s Broadcast Incentive Auction, Howard President Wayne A.I. Frederick released a statement yesterday stating that Howard will keep its noncommercial license to operate WHUT-TV, the only Black-owned public television station in the country. The university’s reason for its “voluntary withdrawal” from the auction was that the “relatively low yield [from the auction] would not justify relinquishing the university’s rights to broadcast WHUT-TV.” 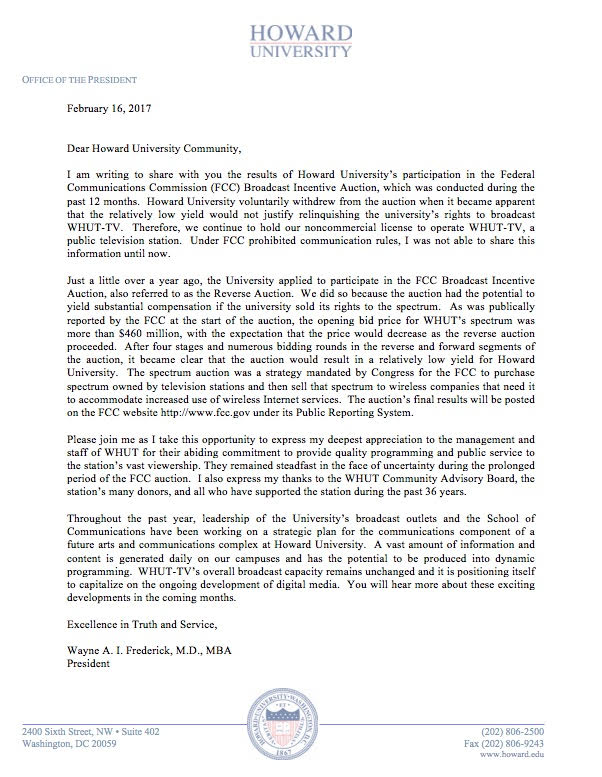 According to the statement, WHUT-TV’s spectrum was placed in the Federal Communications Commission (FCC) Broadcast Incentive Auction early last year. In October 2015, the University issued a statement to students detailing its potential involvement in the auction, which received much backlash. The October 2015 statement cited four options for the future of WHUT: Sale and relinquishment of broadcasting rights, transition from UHF to VHF spectrum, partner or share broadcasting or not participate in the auction at all.

Back in Fall 2015, students launched the #KeepWHUTBlack campaign, delivering a petition to Frederick to prevent involvement in the auction. However, the University still opted to participate up until today despite students’ requests. Although Howard has now decided to keep WHUT-TV’s spectrum, it is still unclear whether the station, which has been beneficial to many students, will continue to be an integral part of Howard University’s School of Communications.