WASHINGTON – African Americans, Hispanics, in fact most people of color, were a rarity at President Donald Trump’s inauguration.

The lack participation America’s black and other minority communities was stark to viewers on television and on the ground.  The makeup of the audience, as well as those on the main stage were in stark contrast to the inaugurations of Barack Obama, Bill Clinton and even George W. Bush.

Those who were there said they attended  to express their support for their country, despite their personal convictions about Trump.

For example, some black college students in the District of Columbia and the surrounding area said they chose to attend the inauguration out of curiosity rather than support.

Ashley Harris is a student at James Madison University in Harrisonburg, Virginia.  Harris said she wanted first-hand experience at a presidential inauguration.

“I’m not a Trump supporter at all,” she said, “but this is the first election I voted in, and this is history.”

Daryl Gardner is a Howard University student who also wanted to witness history during his last year at Howard. 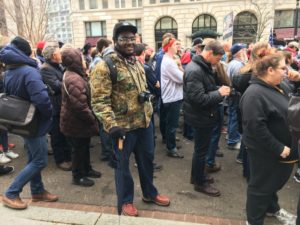 Howard University student Daryl Gardner said he came to the inauguration not to support Trump but to see a historic event, Friday, Jan. 20, in Washington, D.C. (Photo by Sydney Williams, HUNS)

“This is my last year in D.C…so I figured I would take advantage of (the experience),” Gardner said.

Although many African Americans are not optimistic about the Trump presidency, some are attempting to maintain an open mind and a positive attitude by attending the inauguration.

“I don’t agree with Trump on anything,” Gardner said. “Unfortunately, he’s our president. Therefore…I’m going to see what other people have to say and what he has to say.”

There were some who did come to support Trump.

“I came out today to express my duty as a United States citizen and also to be a part of this great moment,” says Ernest Moussi, who was born in Cameroon. “I am excited and optimistic about (the presidency). I would like to see him speak to the skeptics and…those who may not have supported him.”

Many people from around the world visited the nation’s capital to witness a moment of history. Ryan O’Neill is a citizen of the Bahamas,   said he wants to express his support for America’s new president.

“If I could vote, I would have voted for Donald Trump,” he said.