Former Mayor of Tallahassee and Florida gubernatorial candidate, Andrew Gillum, has been living in a different world with a different perspective since 2000, when he first stepped foot on the campus of Florida A&M University (FAMU).

On Sept. 13, he visited Howard to share his experience with students, faculty and staff through the Cora Brown Lecture Series at the invitation of classmate and Howard professor Dr. Kenesha Grant.

Gillum’s speech began with a very emotional lead. His dream had been to attend Hillman College which became increasingly popular in the 1990’s after the hit TV show, “A Different World.”

“If you came from the kind of tradition I came from and you didn’t necessarily have the lived experience example of college attending individuals in your household, you would connect to whatever the closest thing was that gave you some sense of inspiration to that,” said Gillum. “And to me it was watching ‘A Different World.’”

However, much to Gillum’s disappointment, Hillman only existed in the realm of fantasy. And after graduating high school, he was forced to look at other options.

“FAMU was my Hillman,” said Gillum.

The school is a well respected historically black college in the city of Tallahassee, Florida. The city which would prove to be a pertinent part of Gillum’s political legacy.

“It [FAMU] gave me an experience that says if it stirs in your heart, in your spirit, in your sinew that you are destined to do something, you get out there and you actually do it,” said Gillum.

As a student, he served as president of the FAMU Student Government Association from 2001 to 2002 and was the first student member of the FAMU Board of Trustees. But deep down inside, Gillum knew that leading on his campus wasn’t enough. He wanted to make change in a larger and more impactful space. This led to Gillum becoming the youngest person elected to serve on the city commission.

“Most people didn’t think we would win that race,” said Gillum.

But he did. And the win made him want to continue his stent in politics with the objective of moving “Florida Forward.” After 11 years as a city commissioner, he decided to run for Governor of Florida in a controversial election. Gillum lost, but still gained a lot of popularity due to his engaging platform. 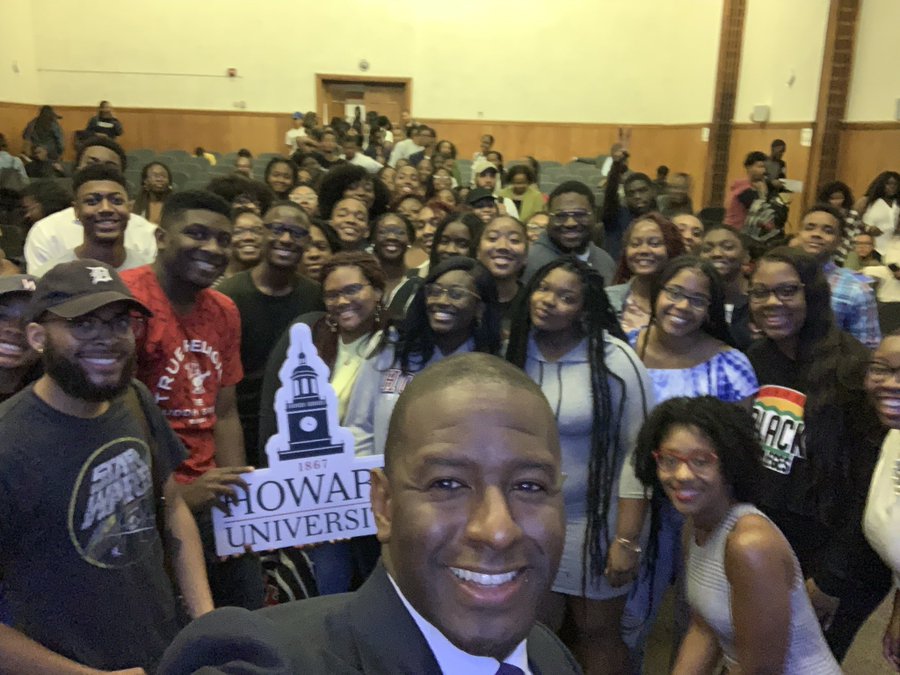 “The other speakers in the series have been of interest to me, however, I’m more interested in Mayor Gillum simply because he serves a purposeful role in the black liberation movement by helping us gain some of our civil rights which have been denied for so long,” said senior political science major Nas Sorrell.

Many students say that Gillum has inspired them to start their own career in politics because of all the change he’s been able to create.

“Our professor was speaking so highly of him [Gillum] and what he was about and I am interested in becoming a Houston district attorney; he sparked my interest,” said sophomore political science major Skylahn Gyampoh.

The professor who started the series and invited Gillum said her goal is to have speakers inspire and encourage students. This years theme for the series is, “Young, Gifted, and Black.”

“I thought that since we’re in Washington, D.C. it should be the case that Howard University students get to hear from people who are doing work in this region; and because Howard has such a great brand many people volunteered to come,” said Grant, the creator of the Cora Brown Lecture Series.

Students who attended the speech walked away with a wealth of knowledge.

“I feel charged to do something within my community to spark change,” said freshman civil engineering major Gabrielle Booker.

Gillum stated early in the speech that his goal was to leave students with a message.

“You should want to be a living breathing example of what is possible. You can’t let people put limits on your potential,” said Gillum.