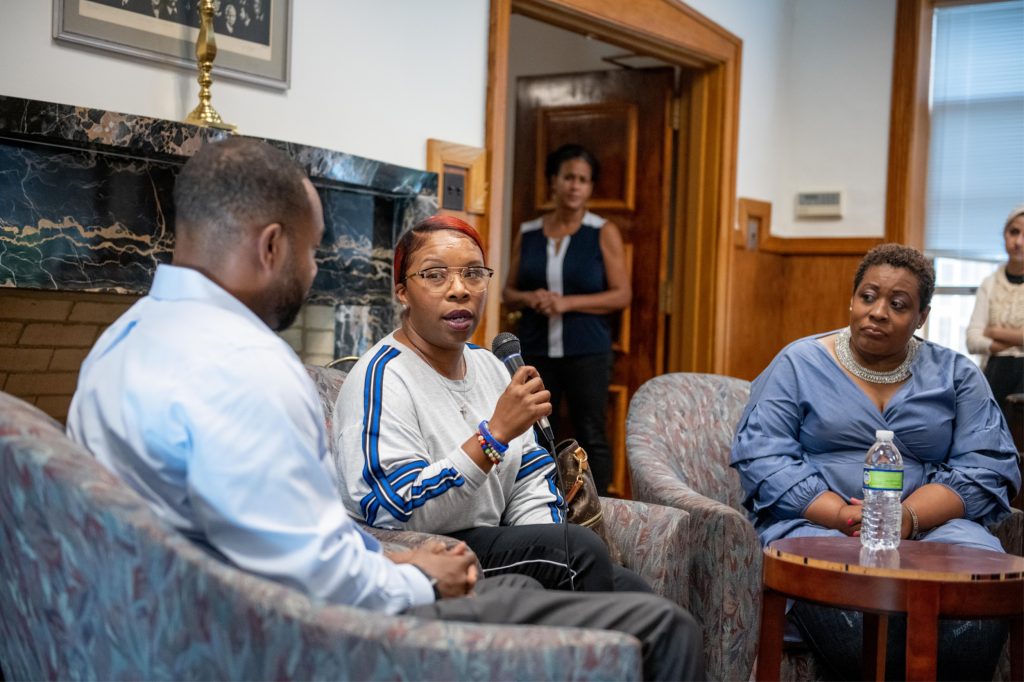 On Oct. 10, the Howard University School of Law hosted Lezley McSpadden, mother of the late Michael Brown, for an evening of conversation about her continued fight for social justice. McSpadden is now the president of the Michael O.D. Brown Foundation and the author of the novel “Tell the Truth & Shame the Devil: The Life, Legacy, and Love of My Son Michael Brown.”

In August, McSpadden announced her candidacy for Ferguson City Council. If elected, she plans to focus on three particular issues: economic equality, community policing and access to health care, specifically for the children of Ferguson.

“I wonder about those kids and the other people of Ferguson who stood out there with me for four and a half hours that didn’t get any mental health help.” said McSpadden That would absolutely be a policy change for me and something that I would like to introduce.”

Following the tragic shooting of her son, McSpadden struggled with her mental health. With help and encouragement from mothers who had also lost sons to murder and gun violence, she was able to seek assistance from a therapist. Her experience inspired her to establish Rainbow of Mothers, a program within the Michael O.D. Brown Foundation which provides therapy and supportive services to mothers who have suffered the loss of a child.

“I just didn’t know how I was going to get through any of this. How was I going to get up the next day and take a shower, brush my teeth, put one foot in front of the other?” she said.

Earlier this year, the Thurgood Marshall Center for Civil Rights at the Howard University School of Law partnered with McSpadden to produce a bill concerning police brutality and the effect it has on mental health. After learning from a state representative that those affected by police violence are only offered mental health services if the officer involved is convicted, McSpadden sought to introduce legislation that treats police brutality as both a legal and mental health matter. The bill has been dubbed the “Michael Brown Bill”.

As Oct. 10 was World Mental Health Day, personal care became a main subject of the discussion, particularly the stigma attached to it within communities of color. Part of the mission of the Michael O.D. Brown Foundation is to increase physical and mental health literacy in low-income communities, as well as provide greater access to health care and support. McSpadden urged the present students to return to their communities after graduation, emphasizing the importance of passing knowledge in order to improve the lives of others.

“If you know better, you do better. And sometimes you have to go back and educate those who never got to do anything outside of those four walls. Some people don’t get the chance to get an education, to go to college,” said McSpadden. “I will always go back to my community to educate on the things that we say is ignorance because we aren’t allowed to grow.”

Safety and mental health for the children of Ferguson are significant not only to McSpadden, but also to her close friend who accompanied her to the event, Marty K. Casey. Only months after the loss of Michael Brown, Casey established Show Me Arts Academy, a non-profit company that offers instruction in performing arts to the underserved youth of St. Louis. Show Me Arts Academy has serviced more than 2,500 children in the community thus far. In 2016, Casey and the company were featured on Beyoncé.com as part of the #BeyGood campaign.

Many of the students at the conference named the shooting of Michael Brown on Aug. 9, 2014 as the event that inspired them to attend law school. They were profuse in their thanks to McSpadden and promised to continue to stand with her in her journey to justice.