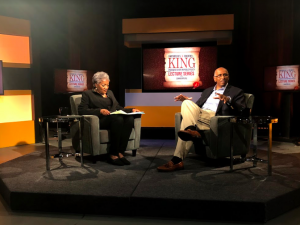 On the 17th anniversary of the 9/11 attacks, King Endowed Chair and former Democratic National Convention Chair Donna Brazile sat in conversation with Michael Steele, former chair of the Republican National Convention. Brazile and Steele are two of three African-Americans to hold the position of chair for each party. The lecture was entitled “The Future is Now: Reviving Civility.”

Steele is a self-proclaimed Lincoln Republican, while Brazile described herself as a true liberal. Though the two have ideological differences, Brazile was intentional in choosing Steele as her first guest.

“It’s time that we go beyond what I like to refer to as the cheap conversation that we’re having in our country,” Brazile said, “I felt it was necessary to bring in a national leader, … someone who understands the Republican party, to have a conversation about many of the major issues we’re facing today from gun violence to immigration reform. We’re also going to focus on why it’s important to revive civility in our public discourse.”

The root of the civility issue, Steele contended, is the focus on politics, rather than policy.

“To contextualize civility, we have to understand our nature, and our history in this country,” Steele said.  He took the conversation back to the election of 1800. The disagreements surrounding this election ultimately led to the death of former Secretary of the Treasury Alexander Hamilton at the hands of former Vice President Aaron Burr. Now, he says, the ability to communicate instantly and access to the internet have polarized the electorate even further. “It’s no longer that I don’t like you because we disagree on some political issue. It’s ‘I don’t like you because you disagree with me’,” he said.

The lack of civility has put the Republican party, as well as the American electorate, in an ugly space. “You have a president today who in a moment like Charlottesville sides with white nationalist racists instead of siding with the American people, to satisfy his own ego and to keep that base as close as he possibly can,” Steele said.

Brazile and Steele noted the challenges they faced as African-American politicians, contesting a good-ole boys network and the need to shake up the systems established. They shared similar experiences during their times as chairs of their respective parties, when they dared to speak up and fire long-time contractors. Ten years later, the contractors are back in their respective positions with large contracts.  “That’s the system,” they said.

Brazile and Steele agreed that it is time for the youth and minorities to lead the charge. “Don’t ask for permission,” Steele urged. “You create your space. You own that space, because you’re being handed a country that has some real problems. A baby born today owes the federal government $83,000. That’s on your watch.”

While they mentioned a need for more engaged young politicians, they acknowledged that there is a new wave of progressives like Alexandria Ocasio-Cortez of New York, Florida gubernatorial candidate Andrew Gillum and Georgia gubernatorial candidate Stacey Abrams, who are leading a charge of their own. This new wave of politicians is getting its support from grassroots campaigning and actively engaging with constituents. Ocasio-Cortez posted a photo on Twitter of worn-down shoes that she wore as she went door-to-door addressing constituents. Steele says the voices of the student activists that emerged after the Parkland shooting are partly responsible for Gillum’s success.

By the time Brazile opened the floor for questions, students prepared to answer that charge. Freshman political science major, Spanish and Arabic double-minor Maurice Green felt that his presence at the lecture was essential. “Our generation, as millennials, we have a lot of potential political power. Also, as black leaders, we need to figure out how to wield that power in order to get what we need done,” he said.

“It’s important to show up and be heard, to share thoughts and hear other people’s ideas, and also just to listen. I missed class for this. This took precedence,” said PhD student Angela Pashayan. During the question and answer period, Pashayan expressed a controversial opinion. Though she made it clear that she does not support President Trump, she expressed that he does, indeed, have a role in making America great again.

“The times that we are in demand what we experienced this evening, and that was a civil conversation between a Republican and a Democrat about the state of the country, about the state of politics and the Trump era,” said Patricia Walters, wife of the late scholar and former chair of Howard University’s political science department. She echoed the necessity of this conversation ahead of midterm elections. “This is the most important election of our lifetime,” she said.