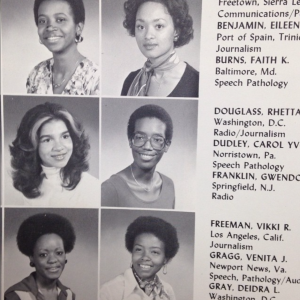 Carol Dudley was in the middle of an advising session when she got the call Friday afternoon. The former student she was advising had a hard time finding work post-graduation and she sought Ms. Dudley’s help, so she came down from Canada and set up this meeting.

The call sounded like a typical meeting– Dudley never would have expected what came next. Around 1 p.m., she sent out this Facebook post, “Today Howard University broke my heart. Due to financial reasons I will no longer be working for Howard. I love you. Ms. Dudley.”

Dudley graduated from Howard in 1976 with a degree in Speech-Language pathology and had been employed at Howard University for the past 42 years. Most recently, she was the Director of the School of Communications’ Office of Career Services.

Not long after the Facebook post, students’ outrage, pain and disappointment was tangible in the School of Communications. In the lounge, students vowed to do something– anything– to bring Ms. Dudley back. By 5 p.m., #BringBackMsDudley was the number two trending topic on Twitter in the D.C. area. Throughout the weekend, the hashtag grew with students and alumni expressing their disappointment in the University, Dudley’s phone rang nonstop with calls of support, an alumna created a Tumblr page for favorite Ms. Dudley stories and one even created a #BringBackMsDudley t-shirt.

Maya King, a senior Print Journalism major tweeted, “I really want @HowardU to be more mindful of who and what it invests in. This is a direct hit to students. And it sends a message. #BringBackMsDudley.”

“That position meant the world to me,” said Dudley. “One of the things that I think is so important about that position is the person assesses the student first.”

She drew this inspiration from her former professor, Tom Walker, who assessed her and decided that she needed to be in a position to work with people. Her commitment to getting to know students personally and professionally was what endeared her to so many.

“It was what I was meant to do,” said Dudley.

“Over the years, I’ve watched as Ms. Dudley spent thousands of hours playing mom, psychologist, event planner and career planner to tens of thousands of students. We are her family. She’s irreplaceable. #BringBackMsDudley,” said Anna-Lysa Gayle, a reporter for ABC7.

Students and communications professionals who had crossed Dudley’s paths would not rest until President Frederick, the rest of the Howard University community, and the world knew that there would be no School of Communications without Ms. Dudley.

By Friday evening, there was a second Facebook post. “Dear alumni and students: I want to thank all of you for your overwhelming kind and passionate support that you showed me today. President Frederick called me a little while ago and I will be meeting with him on Monday. YOU PAID IT FORWARD AND MY HEART IS FULL!”

Dudley said that the President called her a second time over the weekend to check on her and make sure she was okay.

After her meeting Monday, Dudley has been reinstated as an employee of the University, this time in the Office of Career Services. She will be fulfilling the same function, for the entirety of the University. However, she says, there are some functions for the School of Communications that will not fall under her control.

One of those functions is the annual career fair that she was in the middle of planning. Both students and recruiters travel from as far as across the country to this career fair every year. Due to construction in Blackburn, the space for the career fair had not yet been established. She was not able to give an answer on whether the career fair will continue or not.

Dudley’s release was one in a series of budget cuts University-wide. In the School of Communications, many administrative positions were cut alongside Ms. Dudley. Dudley was aware that there were financial issues, but maintained that School of Communications employees were told budget cuts would come from specific accounts and not from cutting entire positions. She also said that she thought the time for the issue had passed.

Dudley is just one example of how students and the University community have organized and held the University accountable for what they believe the University should prioritize. It calls for students to pay attention and be aware of the critical period that the University is in, as not every issue is as public as the release of Ms. Dudley.

The Office of University Communications declined to comment, stating that “As a matter of protocol, Howard University does not comment on personnel matters.”