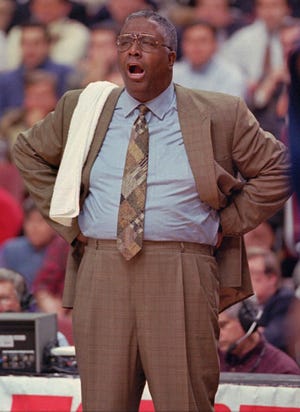 This past weekend, during Mamba Week; a week honoring the late Kobe Bryant, the sports world lost another mamba – the original mamba – John Thompson at the age of 78-years-old on Aug.30, 2020.

If 2020 had an occupation, it would be a teacher, and its lesson is that life is just a vapor, even for icons.

Before enduring a special journey as the Georgetown Hoyas basketball coach, Thompson played in the National Basketball Association. He won two NBA championships during the 1965 and 1966 seasons, as a Boston Celtic —a term coined after a leprechaun who urges one to search for the pot of gold at the end of a rainbow.

Thompson would prove to be that rainbow that gave many African Americans access to a pot of gold they never imagined they could reach.

John Thompson took over the Georgetown men’s basketball team in 1972, which had a 3-23 season record before his arrival, and only one National Collegiate Athletic Association (NCAA) Tournament appearance.

For the next 27 seasons, with a white towel wrapped over his right shoulder, he led the Georgetown Hoyas to 20 NCAA tournament appearances, three Final Four tournaments, and the institution’s only national title in 1984.

With a resume of that caliber, some people believed coach Thompson’s focus was strictly winning basketball games, but the real basketball development started off the court— not with the program, but with the players.

“He wanted to expand our world,” said Michael Jackson, Thompson’s former player and member of the 1984 NCAA championship Georgetown team.

His embodiment not only as a coach but as a father, for some, would save their lives.

Allen Iverson, in the mid-1990s, had all hopes for advancing his basketball career shattered after he was loosely convicted of a crime.

After he was pardoned by the state, the unorthodox boy from Hampton, Virginia, needed a savior, and Thompson gave that to him.

“He saved my life,” Allen Iverson said regarding Thompson, in his 2014 self-titled documentary.

Thompson, as he did for so many other players, took Iverson out of a well of darkness and was the light that the Hampton-native never thought he would envision again. Iverson was one of the four NBA Hall of Famers Thompson would coach, along with Alonzo Mourning, Dikembe Mutombo, and Patrick Ewing.

Although Iverson stood out like a unicorn, Thompson mentored each of his players to be a star in every aspect of life.

As many people believe, it is education that is a black man’s largest key to success. John Thompson took this key and used it well, as 78 of the players he coached stayed the complete 4 years at Georgetown University. Out of 78 players, 97% graduated— showing that Thompson’s heart did not lie in whether his players had a floater, but whether they had a future.

His fiery, charismatic, and thoughtful attitude in-person transferred on the court and led to him becoming the first black coach to win the NCAA title, bearing much fruit for Black athletes. Thompson was the vine and one of his branches was the legendary Patrick Ewing.

“I would not be in this position without him,” says Patrick Ewing, the current coach of the Georgetown Hoyas and former apprentice under coach Thompson, in an interview with NBA TV.

As he molded boys into men, and players into coaches, the very coaches that he marked up the X’s and O’s against had nothing but the same respect for him.

Mike Krzyzewski, coach of the Duke Men’s Basketball team, gracefully said Thompson was “not just a giant, he was one of a kind.”

Krzyzewski, a white man, saw the power of a Black man taking a predominantly white team and raising it to uphold the similar values that only an HBCU could instill.

In 1989, the activism by coach Thompson would solidify his place in sports history after he briefly hung up his coaching career for a greater cause— something that would pave the way for protests today within sports.

With the provisionary Act 48, the NCAA would confiscate athletic transcripts from freshman who failed to reach academic standards, affecting 90% of Black athletes. As a result, Thompson refused to coach until justice was served with the idea in mind to commit to change.

This very cry for justice by the actions of one man has shone a light on a new generation, as NBA players today protest in the face of injustice.

As for the towel over his shoulder, it was not just to wipe off sweat, but to wipe some tears from young Black men with broken hearts, and to let them know that “Big John” was a rock you could lean on.

Little did coach Thompson know that his retirement from the NBA after two seasons would birth a career that would affect so many men.

Though his playing career was shortened, Thompson taught not just the Black community, but all humans of all races, that when one retires in an area, another life must resurrect—and this new life you resurrect called your purpose, will carry on a legacy that flies to an atmosphere which death cannot conquer.

Thompson would lead many to the pot of gold and teach them what to do with it. “Big Ace”, as he called himself, wore a Celtic jersey on the court but wore a Trailblazer jersey off the court, and for that, he will always live eternally in the hearts of many.

Published in Featured and SPORTS