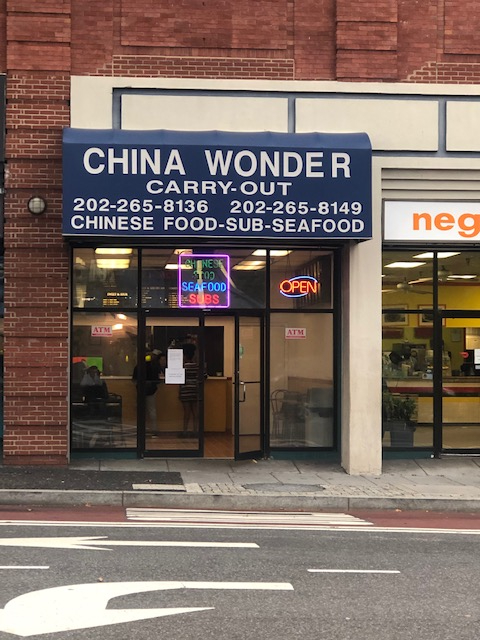 China Wonder, the family-owned takeout restaurant located at 2301 Georgia Ave., closed on Oct. 31 after three decades of serving the Howard University community. Jimmy and Judy Chueng, whose three adult children worked at the restaurant over the years before starting their own careers, expressed the difficulty it took for them to finally let go of the business. They stayed open longer than expected because they wanted to be open for Howard’s homecoming to see Howard alumni.

“It’s just me and my husband now, and we are tired. We are open 364 days out of the year, and the only day we are closed for is Thanksgiving,” said Judy Cheung.

Students and alumni have been visiting the takeout restaurant one last time since its closing was announced. As customers ordered their food, they talked and laughed with the Cheungs, letting them know how missed they will be.

Jamal Harris, who is a third-generation Howard alumnus, stopped in on the last day. He ordered two quarts of mumbo sauce and hugged the Cheungs.

“They took care of my family while they were here at Howard. This place is going to be so missed because there are less businesses like this who actually care about the community they serve, so it’s sad for me,” said Harris.

As gentrification continues throughout the District of Columbia, more small businesses are closing, and more chain restaurants are opening.

The space on Georgia Avenue that housed China Wonder is owned by Howard University. The Cheungs have been renting out the building on a month-to-month lease for the past 15 years.

China Wonder’s original lease ended in 2003, and the university gave the Cheungs a five-year extension to 2008, according to Gregory Coker, an account executive for Real Estate Development and Asset Management at Howard.

In 2009, the real estate office negotiated another lease extension for the family-owned restaurant and from then on China Wonder was on a month-to-month lease for 10 years. The Cheungs planned on selling their business. However, the potential buyer wanted a longer-term lease than the real estate office would grant. The office’s plan is to redevelop the entire front retail level.

“At this point, we are just looking strategically for the best fit to join the Howard community. We are concerned about what the students would want and what food option would be beneficial,” said Coker.

There are several restaurants interested in the property, including the food truck Jerk-at-Nite and the restaurant Ma and Pops. The office is also looking for a business that offers healthier food options since students have brought it up in conversation.

As people placed their orders on China Wonder’s last day, customers talked about the memories and experiences they had at the restaurant. China Wonder was an intricate part of what made Howard feel more like home. China Wonder will be missed and never forgotten.

“There is no place like Howard. We love the students and faculty. We are honored that we will be so missed,” said Judy Chueng.

The Cheungs attributed the success of China Wonder to their superb customer service skills. They connected with Howard students and the community on a high level.

“This is our community, we love them, and they love us. China Wonder closing doesn’t change that. It’s just our time to move on,” said Jimmy Chueng.