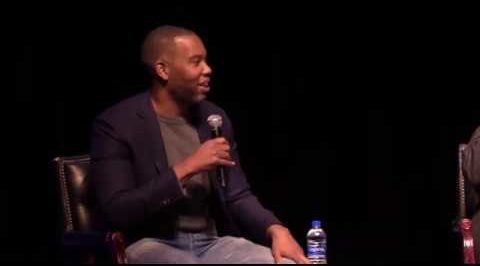 Ta-Nehisi Coates Joins ‘Power of the Pen’ at Howard

March 5, Cramton Auditorium was charged with an air of duty to the community as writers and luminaries Jelani Cobb, Ta-Nehisi Coates and Nikole Hannah-Jones spoke on a panel entitled the Power of the Pen, moderated by Howard University class of 2018 alumnus and independent journalist Anthony Brown, Jr. The program was co-sponsored by the Howard University Association of Black Journalists, Cover 2 Cover and The Ida B. Wells Society, of which Hannah-Jones is a co-founder.

Throughout the night, the panelists emphasized a sense of responsibility bestowed upon them by their ancestors to their communities, and in Cobb and Coates’ case, by Howard University. “I used the tools I gained at this institution in a way that was befitting to those who gave it to me,” said Cobb.

“There’s a sense of mission that Howard inculcates you with,” said Coates. “It’s really not enough for you to go out and be a relatively successful journalist. You have to use the work that you create as a sword. You’re at war.”

Working toward that mission, Coates and Hannah-Jones stressed the need for excellence.  “You have to not only be excellent, but excellent in the cause of something…It feels like weight, but it’s actually an accelerant…It’s a different kind of fire, a different kind of intensity you bring to the job,” said Coats.

Coates listed Toni Morrison, Zora Neale Hurston, Ossie Davis and many other notable Howard alumni who shared in this mission and placed the charge on his shoulders. His best-selling non-fiction book, “Between the World and Me,” is a letter to his son on the realities of being black in America.

Hannah-Jones similarly voiced her mission, specifically as a black writer. “I don’t believe in objectivity. Not a single human being is objective about anything,” she said. “I think segregating black children in inferior schools is wrong and I’m not going to try to write a story that pretends there are two sides to that story.”

The writers vehemently denounced stigmas of black ignorance and the ideals that we must define ourselves by the standards of white America. Instead, they pushed authenticity and a collective racial self-esteem that goes against the falsehoods perpetuated by white America.

“[Black people were] a penniless people who invested the pennies they had into schools. Black people and formerly enslaved people brought education to the South,” said Hannah-Jones.

“I don’t think there’s a kind of Negro ignorance that’s more recalcitrant and more resistant to the inoculation of knowledge than the strain in ignorant white people who are running around in MAGA hats heralding every wild conspiracy theory that a conman grifter has given them to boost their collective racial self-esteem,” said Cobb.

Another common theme was resources, or lack thereof, and how that relates to personal and collective success.

Howard’s approximately $700 million endowment pales in comparison to universities like Harvard, which has an endowment of approximately $40 billion. However, black students are still flocking to Howard, “because they feel something,” said Coates.

“Our luminaries are freedom fighters,” he said, reminding every student present of their duties to carry out that legacy.