History has shown to repeat itself with the recurrence of the student takeover of Howard University’s Administration building. As of Thursday afternoon, students flooded the Administration building with intention to stage an all-night sit-in to protest the recent financial aid scandal, in which the embezzlement of nearly $1 million in financial aid funds were allocated to the department’s former administrators, and the university’s administration mishandling of various issues. The sit-in, organized by HU Resist, has followed into the next day, with students covering all the exits to prevent all personnel from entering the building and putting a stop to the functionality of the building.

Humphrey is also an organizer of HU Resist, and when asked how long this protest will persist, Humphrey replied, “As long as it takes.”

Chanting “Beep Beep Bang Bang Ungawa Black Power,” the students have become unified in their frustrations with the university— and they’re not alone. Various anonymous donors have contributed food, water, money, and other supplies to HU Resist. A list of demands have been produced by the organization, and students are not budging from the building until negotiations have been made, and their demands met. The various demands include the implementation of a “grievance system that holds faculty and administration accountable in their language and actions toward students with marginalized students,” “the immediate resignation of President Wayne A.I. Frederick and the Executive Committee of the Board of the Trustees”, and the enactment of a democratic system that allows students to “influence the decisions of the administration and the Board Of Trustees by way of popular vote. A complete list of their demands is provided below. 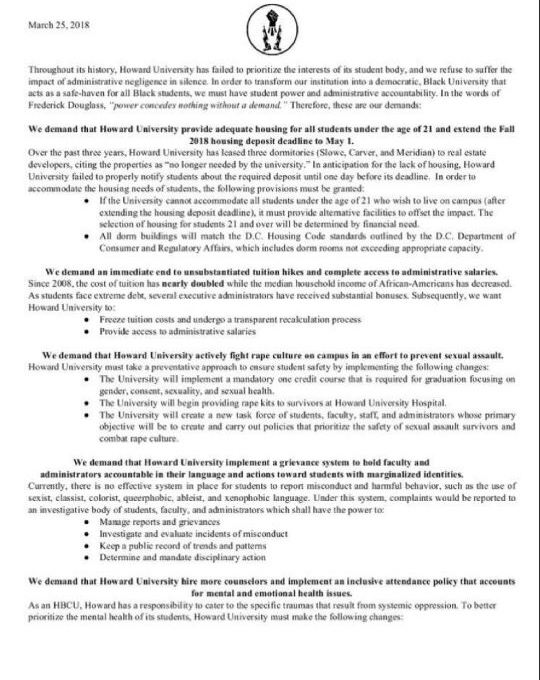 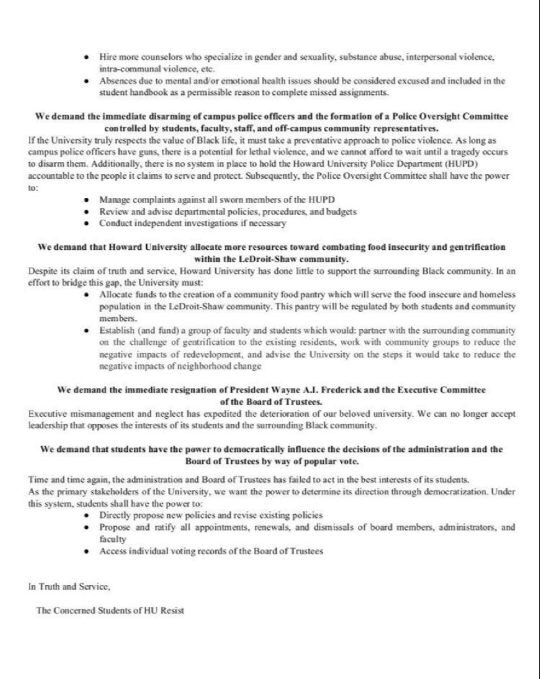 However, a statement released by Stacey J. Mobley, the Chairman of the Board of Trustees, expressed that the concerns that were communicated were “inaccurate,” and followed by addressing the issues that were raised, and how the university has been working to mend these problems. However, students are not convinced, and have proceeded to still protest.

“I’m participating in the sit-in because I feel like we need to do something about all the injustice that’s been going on on campus,” said freshman nursing major Ijeoma Okaforize from Brentwood, California.  “The financial aid [scandal] is not the only thing that’s been going on. There’s a lot of stuff with housing, and just the condition of the campus in general. It’s been a lot, and I just feel like this is a very effective way of letting them know that we’re fed up.”