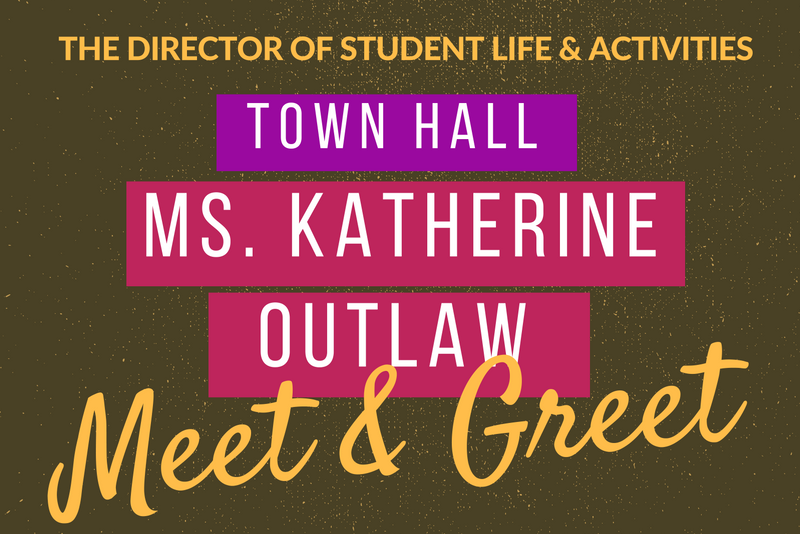 Howard University students were introduced to the new Director of Student Life and Activities at a town hall meeting, Tuesday, November 15. Katherine Outlaw, who has worked in higher education since the age of 18, stepped into her new role hitting the ground running. Within her first five weeks, she has already made changes consistent with her vision for the school’s activities department.

“In my five weeks here, all the locks have been changed for the doors for student organizations, the offices have been painted, along with all the ceiling areas that were changed, because there were holes in the ceiling,” said Outlaw about the new locks, paint, and tile throughout the Blackburn Center.

Roughly 17 students attended the town hall meeting, many of whom were executive members of various campus organizations. To better understand the student body’s concerns, questions, and solutions, Outlaw placed posters around the room for students to anonymously voice their concerns. While she was able to address a few complaints, she was not satisfied with the turnout.

“The people who did not show up may complain, but they weren’t here to help with the change.”

For those who were there, they felt hopeful about the meeting and the future of student activities. Angelica Pozo, president of Jewels, Inc. said, “The event was very helpful and very transparent. As an executive member, the stress that I’ve had has always been the hassle with Howard.”

Other student officials found their frustrations rooted in the lack of appreciation by the school for their work. Emir Bailey of Phi Beta Sigma Fraternity, Inc., Alpha Chapter, was vocal about his disdain for the little recognition the organization receives in return for all they do for the university. As a representative for C.A.S.C.A.D.E. (Coalition of Activist Students Celebrating the Acceptance of Diversity and Equality), an LGBTQ student organization at Howard University, Bailey also felt strongly about the functionality of the group.

“There is no reason that this room should not have been packed tonight. I think that people need to take this more seriously, because there will be the people complaining about what’s going wrong, but they weren’t a part of the conversation.”

Outlaw lives her life by being proactive not reactive. She plans to start on a clean slate by repairing broken gym equipment in Burr and creating clear policies. Through research, she’s found that the biggest issue between the university and its organizations is a lack of communication.

With an outlined list of plans to initiate change, starting with hiring new staff, Outlaw expressed that she is on the road to assist in bringing back “Bison Pride.”

“When you come to my office, you’ll get what you need,” Outlaw said. “If you get a ‘no’ from me, you’ll know why, because customer service is important to me.”