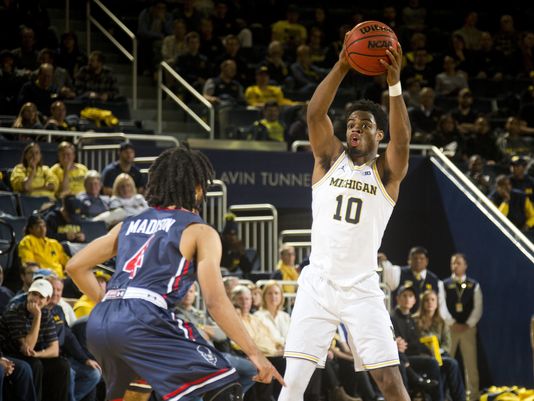 On Friday, Nov. 11, Howard University’s Men’s Basketball team faced Big Ten opponent, University of Michigan, for their season opener. After putting up a tough fight, the Bison fell short to the Wolverines.

Going head-to-head against the Wolverine’s, the Bison were down by five in the second half with a little over 12 minutes to play in regulation. The Wolverine’s (1-0) played at a pace the Bison (0-1) were uncomfortable with. This pace led to a 76-58 loss in the first round of the 2K Classic at the Crisler Center.

“I think we did okay in the first half,” senior forward Marcel Boyd said. “We played hard and gave was locked in on defense. We just have to be able to play like we did in the first half the entire game. We are a very well rounded and deep team. We had a lot of different player contribute to the game in good ways.”

Sitting out during the game was senior guard James Daniel III, who was the leading scorer in the NCAA last year.

Despite his absence, the Bison continued to stand their ground. However, they fell short when it came to free throws and had turnovers that the Wolverines turned into points.

“We could’ve knocked down our free throws better and then limited our turnovers in our offense,” senior forward Solomon Mangham said.

Minus their mishaps, the Bison kept fighting. Damon Collins, James Miller and Dalique Mingo were a force to be reckoned with closing the gap to 43-38 at one point.

But the Bison continued to struggle.

At the end of the game, Collins finished with 12 points and Miller with 10 points. Dalique Mingo, Marcel Boyd and Mangham each finished with 9 points each.

“This game gave us a good insight of what we need to continue to work on to get to where we want to go,” Mingo said. “Other than that, it was just an overall good experience that we actually competed with them.”