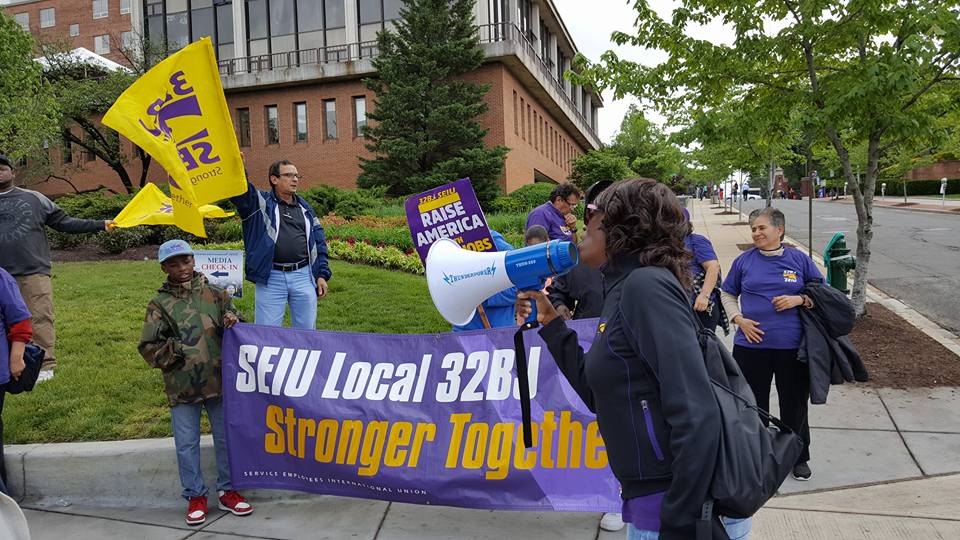 When the celebration ends and all the confetti is gone, there is clean up to be done and life continues to goes on.

This was the case Saturday afternoon during Howard University’s 148th Commencement, as about two dozen former contracted maintenance workers and supporters demonstrated right outside of the Mecca due to the final decision of employees being laid off by their contractor, black-owned company Thompson Hospitality.

“Our fight is with Thompson [Hospitality] because Thompson are responsible for these workers, but Thompson works for Howard [University] and Howard should have the final say, if they wanted to,” said Jaime Contreras, vice president of 32BJ SEIU.

Most of the 24 laid off workers are members of 32BJ SEIU, the largest property service workers union in the country, which has more than 155,000 members in 11 states including over 17,000 in the D.C. Metropolitan Area.

The demonstration that occurred Saturday wasn’t the first time the former workers have acted in protest against their circumstances. Fellow employees have been fighting the battle to keep their employment.

Most recently in the last few weeks, they asked Howard University students to help sign a petition that gathered more than 1,000 petition signatures. This allowed the employees to deliver the petition to Thompson Hospitality’s offices in April.

According to a recent official statement by 32BJ SEIU, “The 24 workers who lost their jobs include custodians, drivers, a locksmith, carpenters, electricians and plumbers who work at residence halls, academic and administrative buildings, as well as other on and off campus buildings. The workers’ last day was April 24. The union is challenging the layoffs.”

The uphill battle has been ongoing since 2014 when in a letter, the decision to transition management responsibilities from Howard University to Thompson Hospitality was made. With now becoming contracted employees, the decision left many former Howard to now Thompson employees in a critical bind. Reviews of the statuses of their benefits, to include medical, dental, paid leave, retirement accounts and pensions were now in jeopardy.

When The Hilltop reached out to Howard University for a statement, they responded with no comment on the situation.

“Many of them [contracted workers] have worked here for as long as 40 years,” said Julie Karant, 32BJ SEIU’s spokeswoman. “These men and women are an integral part of the Howard community and it isn’t right for the university to potentially threaten their benefits by outsourcing their work.”

“Many have worked at [Howard] University for decades and some have even sent their own children to the university.”

This is what former maintenance technician Johnnie Mobley, a Northwest D.C. resident, had hoped to do for his wife and nine children when he started working at Howard University with Thompson Hospitality Jan. 26, 2015. He was 25 days late to be grandfathered into the policy Howard implemented of waiving tuition for workers’ children.

When Mobley received the laid off letter earlier today, he wasn’t sure if he got laid off or terminated.

“I just wanted to work to take care of my family. I’m the head of my household and I’m already working paycheck to paycheck. Sad to say, this was the worst company I’ve worked for. It’s a terrible thing when they call themselves a company.”

Karant explained that 32BJ SEIU had tried to warn Howard University of contracting employees. In a 2014 press release, 32BJ SEIU outlined, “Though the university is facing budgetary challenges, outsourcing won’t solve them and can even lead to unforeseen problems that can be difficult to reverse.”

Mobley expressed that the worst part about it all was that students made work easier for him because they needed him and his colleagues.

“I really enjoyed my job and the students understood our situations,” he said.

“A lot appreciate the work we have done to keep the facilities clean and they understand our situation. They [students] are pretty patient with the workers and have expressed their sincerity.”

With the arrival of President Barack Obama at Howard’s 148th Commencement overshadowing the demonstration, the former workers and 32BJ SEIU vow to continue to do demonstrations until their voices are heard, said Contreras.

“What they were trying to accomplish was to get these people back to work. We’re trying to make sure these workers have a job,” he said.

“These workers are part of the community and intercool part of the D.C. community. It [Howard] is an institution we all love and want to succeed, but at the end of the day, they have the responsibility to bring in contractors that are going to bring in workers right.”

The Hilltop reached out to Thompson Hospitality office for comment regarding this situation and did not receive a response.