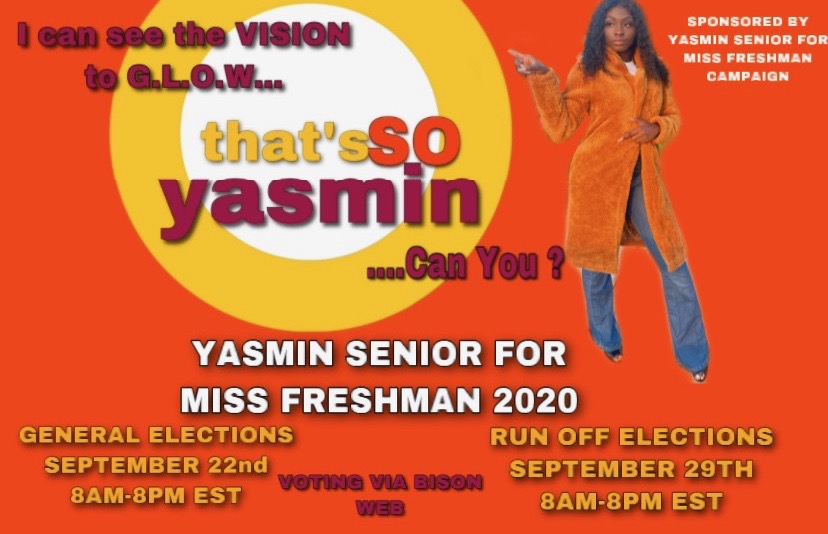 First-year students at Howard University are greeted with a plethora of clubs, organizations and activities to explore. The virtual atmosphere did not stop the incoming class from putting themselves out there, finding interest in the Royal Court and embracing the role as leaders on campus.

Yasmin Senior, a freshman computer science major from Long Island, New York was one of them. Her leap of faith landed her the title of Miss Freshman for the 2020-2021 academic year.

“It was highly competitive. There were about 60 Miss Freshman applicants, 10 of us were selected for interviews and after that, only six were able to campaign,” Senior said.

This year, the virtual pageant consisted of an introduction speech, a platform speech, a Q&A and a talent portion. Every segment of the competition except for the Q&A was pre recorded. “It was something really different for me but also something I really enjoyed,” said Senior.

Senior describes herself as a “people person” and this year she is eager to use her voice as a form of advocacy for freshmen. Before running, Senior noticed that starting college virtually could make it difficult for first year students to not only socialize, but to stay in the loop. She wanted to change that by being a familiar face, offering help to her peers and making their transition to Howard the best it could possibly be.

Her platform, G.L.O.W, stands for growing the community, learning new objectives, being optimistic, and welcoming one another. G.L.O.W’s purpose is to bring the freshman class together while following those practices. Senior hopes that in doing so, her classmates can grow digitally as a family and avoid being distant. While campaigning, Senior’s leading slogan was #ThatsSoYasmin, inspired by her favorite childhood TV show.

“When I was growing up, my favorite show was That’s So Raven, recently I was watching the episode where Raven had a vision that she was campaigning for class president,” Senior explained. “It made me think, why not? I can see this vision for myself and I want other people to see it with me.”

Senior took to social media during her campaign, hosting a variety of events which allowed students to meet her and ask questions. For example, Senior utilized Zoom workshops and Instagram lives, allowing her to engage with many people.

However, like many students at home, she could not help but picture what this experience would have been like on campus.

“I wanted people to see me for who I am, not just through a flyer. I wish I could be in person and talk to people one on one because you can only reach so many people through social media,” said Senior.

Despite that, her efforts were still successful and helped secure her title.

Though she was just recently crowned, Senior has already been proactive in accomplishing her goals for this school year as Miss. Freshman. She looks forward to collaborating with Mr. Freshman, Obiora Okeke, this year.

“We have been reaching out to Royal Courts from other HBCUs and we plan on helping students make connections from all over during these times of uncertainty,” Senior said.

She has also joined a team that designed an Instagram page called the “Howard Hot Spot.” This page serves as a way to connect freshmen while featuring digital events, student owned businesses and more.

She makes it very clear that she is excited to serve as a resource for her peers and wants to see all Bison be successful. “The words of encouragement that I have for my classmates are that you are not alone. Don’t hesitate to reach out to somebody, ask for help, or just vent to somebody,” said Senior.

“We are all here for one another.”