Fact Check: Are Voter Fraud and Suppression Myths or Barriers that Disadvantages Black and People of Color?

The unforeseen challenges of the novel coronavirus, an infectious disease, has impacted the lives and well-being of others across the globe and here in the United States. This year’s pandemic has affected the American way of life, economic stability, and now the day where most Americans civically participate in democracy; Election Day. As the 2020 Nov. 3 election occurs amid unprecedented times, the pandemic has forced lawmakers to reconfigure voting methods to eliminate in-person transmission concerns from voters.

For the first time, pundits and experts predict the general election to be held primarily by mail as a result of the pandemic. And the national response from lawmakers has made voting more accessible for residents in some states than others — with a record-breaking high of more than three-fourths of American voters now eligible to cast absentee ballots.

According to The New York Times, Washington D.C. and nine states will send registered voters ballots ahead of time, 34 states will allow absentee voting regardless of the reason, and the seven remaining U.S. states demand a different reason other than Covid-19 to vote absentee, which leaves the majority of voters to head to the polls.

The recent severe changes to America’s voting landscape does not come without worries from voters to lawmakers, and even President Trump and his administration.

Concerns of voter turnout, fraud, and suppression are becoming prominent in the national conversation again, amid a pivotal and projected close race to 270 between President Donald Trump and his opponent, former Vice President Joe Biden.

There have been claims of voter suppression and voter fraud from the left and the right wings, but more so from Donald Trump in a series of tweets and news conferences.

President Trump and his administration have cited fears of fraud and have launched a myriad of baseless claims that the mail-in voting system will lead to widespread voter fraud. 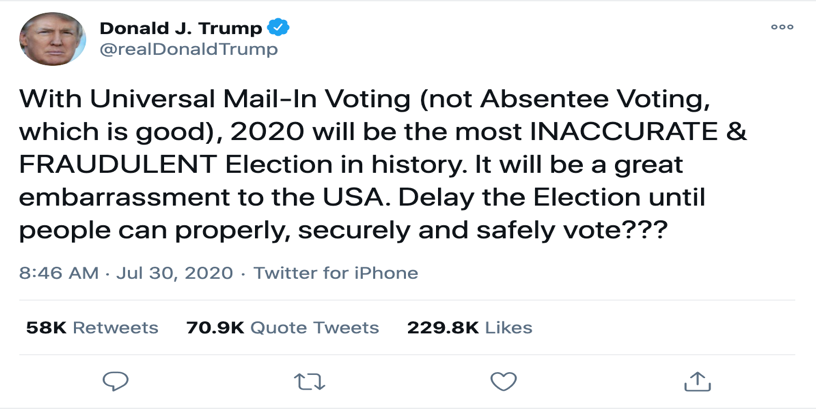 According to the Brennan Center For Justice seminal report on voter fraud, extensive research reveals “that fraud is very rare, voter impersonation is virtually nonexistent, and many instances of [the] alleged fraud are, in fact, mistakes by voters or administrators.”

The report studied elections where voter fraud was referenced and found that 0.0003 percent and 0.0025 percent incident rates for impersonation voter fraud.

In spite of the president’s claim, an American would be more likely to be struck by lightning than to impersonate another voter at the polls, the Brennan Center reported.

“It’s really remarkable when you have mail-in ballots. There is a much greater chance of finding if anyone was trying to do something improper, and that’s often noted as post-election audits. You just have to do a post-election audit to check these types of things. So I think New Jersey’s situation and security are terrific. For those people concerned about others committing fraud, I think it’s unwarranted, and I think it’s just a way to try to make people feel better about their party not necessarily winning the election.”

While President Trump is worried about his support at the polls, and baselessly how the Democratic Party will use mail-in ballots “to rig the election”, voters in New Jersey are concerned about voter suppression and mailing logistics that may halt their voices from being heard at the ballot boxes, especially Black Americans and people of color.

New Jersey voter Kimberly Gardner says she is no stranger to voting difficulties, as her normal polling center was suddenly moved for the 2020 New Jersey Democratic presidential primary without warning.

“I went there, it was empty, and there were no signs. I had to call a bunch of numbers, go on the mayor’s website, and ask my friend, who’s a journalist, and turns out my polling center had moved half a mile and I was never notified.”

I have concerns that my ballot won’t be counted [ for the upcoming election]. Every vote matters and I’m just genuinely concerned that my vote will be sitting in a corner somewhere in a dark room and will not be counted — and that’s just scary” she continued.

Gardner’s experience, coupled with other circumstances alike that typically derail Black people and other people of color more so than white Americans from making their voices heard at the ballot box is often cited as forms of voter suppression.

In an article titled, “Voter Suppression” Is a Myth, but It’s an Article of Faith to Liberals, Election Law Reform Initiative and Senior Legal Fellow for The Heritage Foundation Hans A. von Spakovsky addresses voter suppression merely as a myth promoted by the Democratic Party.

Spakovsky writes, ” it’s a false narrative belied by the facts.”

Despite claims of voter widespread suppression in Georgia, America’s troubled history with equality, and the passing of the 15th Amendment, is voter suppression actually real, and if so does it disproportionately disadvantage Black people and other minorities?

While writers like Spakovsky and some republicans believe voter suppression is a myth, New Jersey’s election history states otherwise, as voters remember the historical voter intimidation mayhem during the 1981 gubernatorial race.

In 1981 the Republican National Committee sent armed-off duty officers known as the National Ballot Security Taskforce ( NBSTF) to “patrol” polling stations and prevent voter fraud. Unsuccessful in their attempt, they created voter intimidation amongst minorities instead.

In fact, in predominantly minority cities across the Garden State, November voters could see warning signs at polling stations that stated:

THIS AREA IS BEING PATROLLED BY THE NATIONAL BALLOT SECURITY TASK FORCE. IT IS A CRIME TO FALSIFY A BALLOT OR TO VIOLATE ELECTION LAWS.

That year, the GOP only sent the National Ballot Security Taskforce to predominantly minority neighborhoods, which Democrats later argued was intentional to reduce Black and Latino voter turnout and suppress.

The armed patrollers were found in neighborhoods like Newark, Trenton, and Camden; all predominantly minority areas, but not in nearby towns like Short Hills, Princeton, and Cherry Hill where large groups of white voters resided.

The lines grew longer where NBSTF were stationed, so people left, and some people who were intimidated by the armed officers did not get in line at all.

As a result, the governor’s race was close, and Republican Thomas Kean defeated his Democratic opponent by over 1,797 votes.

Democrats rebounded by challenging Republicans in court in December 1981, arguing that the GOP created an unfair election and aimed to target Black and Hispanic voters. The brief stated that they wanted to ensure that all voters were free to participate in democracy without fears of intimidation. They filed Republicans were responsible for “efforts to intimidate, threaten, and coerce” qualified voters of color, which violates the 1965 Voting Rights Act through illegal tactics such as harassment and intimidation; all factors of suppression.

This motion by Democrats led to the restriction of Republican voter suppression tactics and such conduct for the next 35 years after a federal court order.

For New Jerseyans, it would be inconceivable to believe that voter suppression is a myth, or a figment of the liberal’s imagination when Republicans willingly signed a decree in November 1982 to settle their wrongdoings. The troubled history of voter suppression in the Garden State is worth recognizing amid growing public fears of suppression.

According to the Brennan Center For Justice, widespread voter fraud is not real, but voter suppression is and it mostly burdens racial minorities.

Voter suppression is defined as a political strategy — usually at the party-level but sometimes conducted by zealous individuals — designed to prevent a group of would-be voters from registering to vote or voting according to Find Law. Demand the Vote, a free voting resource, states that voter suppression is any effort, either legal or illegal, by way of laws, administrative rules, and/or tactics that prevents eligible voters from registering to vote or voting.

Despite the information and extensive research from organizations on the ground, voter suppression is still considered a myth by some, but one expert suggests that it shouldn’t be as our nation’s democracy is at stake.

What Modern Voter Suppression Looks Like in the Garden State

Henal Patel, of the New Jersey Institute for Social Justice, said Black and brown residents are fearful of suppression, encountering officers at the polls, amongst many other concerns.

“We see lots of things that are policy [in New Jersey]– policies or other challenges that make things difficult for voters, like even accessing the ballot box. There are a number of hoops for Black and brown voters that create challenges that can be suppressive.”

“Voter suppression is real. It’s everywhere in this country. We have a lot of laws and policies that lawmakers put into place without thinking about the impact of them on a community. Black people and their lived experiences can tell you a lot about racism and suppression” she continued.

There are many forms of voter suppression that limit voter participation in the Garden State, specifically voter disenfranchisement, police intimidation at the polls, redistricting, and voter registration cut-offs that are most prominent.

In March New Jersey restored the voting rights to every resident that is on parole or probation, but the state still prohibits the voting rights for those who are incarcerated while states like Maine and Vermont have never taken away the right to vote to people with criminal convictions.

In the state, 62 percent of people incarcerated are Black, where the total population is only 15 percent Black.

New Jersey Institute for Social Justice and other organizations also cite issues of intimidation on the ground as police are still patrolling ballot drop boxes in predominantly Black neighborhoods, along with observers motioned by President Donald Trump.

Patel suggests that lawmakers should make the process much easier for citizens rather than placing groups of people at a disadvantage, especially if the goal is to have everyone exercise their constitutional right to vote.

Howard University student and first-time Monmouth County voter Brionna Seward noticed challenges with the voting process in her neighborhood and cited issues regarding access for other residents when casting her ballot.

” This is an important election, and I knew mailing in my ballot was kind of sketchy because of the USPS issue, so I drove to the board of elections at Freehold with my mom and submitted it.”

“In my neighborhood, I didn’t really see much to encourage people to vote, but one big black sign with little information on it, and that’s it. The board of elections is a pretty far drive, so if you don’t have a car it’ll definitely disadvantage minorities here” she continued.

As voter suppression affects the youth, people of color, under resourced, and underserved communities most, Henal believes there is not one general solution to this problem, but there needs to be a thoughtful multi-step approach.

“There’s no one solution. It’s a cultural thing. We need to care about voting and understand why it’s important. It’s important for lawmakers, officials, and everyone else to consider the decisions we are making about elections and whether they are creating additional challenges that threaten our main goal–to make it easier to vote” she said.

“You have to consider the systemic issues around it [voting].”

So, are voter fraud and voter suppression barriers that disadvantage Black people and people of color?

Although Americans, including President Trump, may have their doubts about widespread voter fraud and voter suppression in spite of extensive research; truth be told, the latter and its effects are not a myth. Amid America’s national racial reckoning we are forced to reexamine the systemic non-neutralities within our policy, that considerably stifles Black people and other minorities’ right to an equal and fair democracy.