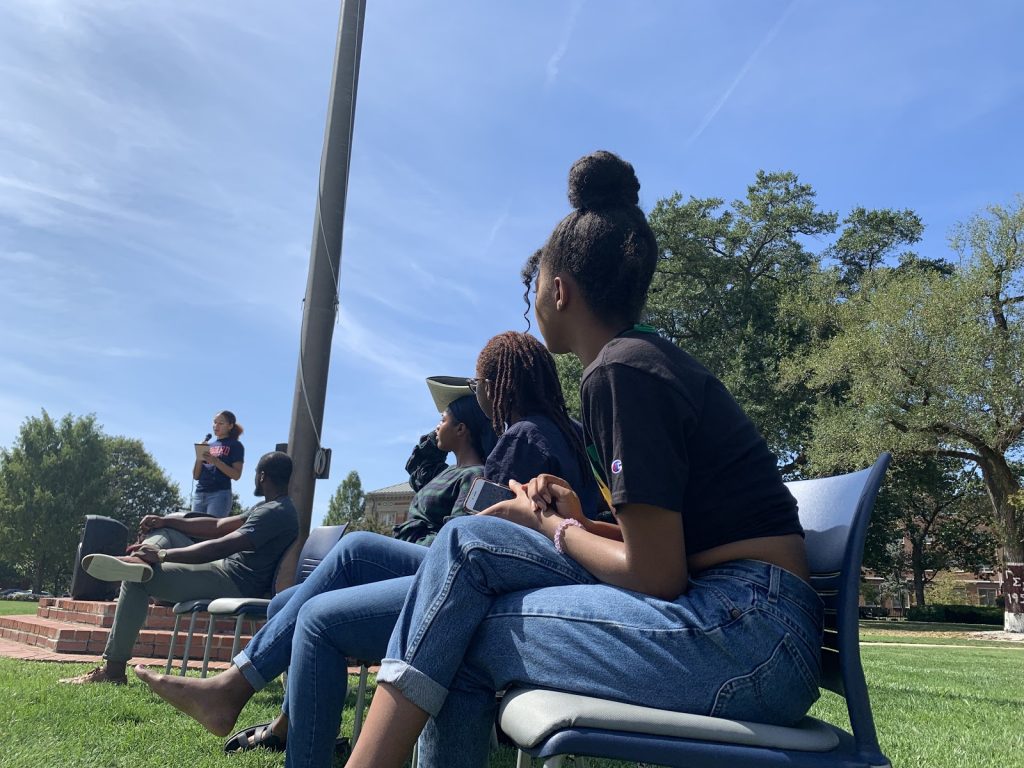 Organizers of the Climate Strike listen to a speech by Audre’ana Ellis, junior enviornmental studies major. Photo by Ashleigh Fields.

As students left Cramton Auditorium after Opening Convocation on Sept. 20, many were surprised to see a group of people gathered by the flagpole on the Yard.

“I was interested in seeing exactly what was being discussed so I decided to head over,” said freshman marketing major Kirsten Roddey.

Roddey was certainly surprised to discover the group was discussing climate change and how it could be prevented.

“It’s definitely a topic that doesn’t receive much public conversation, let alone a protest. I was glad to see that other students care about what’s going on in their environment,” said Roddey.

The event was planned and hosted by sophomore interdisciplinary studies major Destiny Hodges, but also included conversation from guest speakers Jonathan Hutto from Empower D.C., Larry Williams, Jr. from Sierra Club and Howard’s own Dr. Gregory Carr. They each shared a unique perspective on climate change and what students can do to ensure they are protecting the Earth.

Dr. Carr, Chair of the Department of Afro-American Studies, shared that minorities and specifically African American students are tasked with repairing this Earth more than others.

“My perspective on climate change is that as a species the Earth seems poised to get rid of us because of how we have treated her, as African people we led in terms of human efforts to live in peace with the environment. We created the first ways to do that, and we should be in the forefront of leadership now to make sure that we repair the Earth we live on before we are purged from it,” said Carr.

Many of the other speakers agreed with Dr. Carr when it came to the growing issue of climate change being a minority issue.

“As an HBCU, [many] of our students are from low income environments and these environments are affected first when it comes to the negative effects of climate change,” said Destiny Hodges.

The suggestion of free methods of group transportation such as the metro or busing were made in hopes of inspiring others to proactively request policy changes to city elected officials. Speakers at the protest made it a point to emphasize the importance of voting in not only national but local elections.

“I think that events like this climate strike are really important at Howard and college campuses in general. There are a lot of students who want to make a change in their community and a great place to start is working towards improving their planet by becoming environmentally conscious,” said Soha Mohammed, freshman biology major.

Many students want to be involved in making an effort to protect their Earth but are often unsure of where to begin.

“It starts right now by raising awareness, having people engaged in environmentally responsible behavior. Everything from energy use and requiring the University to begin to retrofit the campus to be more environmentally friendly, gaining more green technology, to studying things like the green new deal are places where students can come in,” said Carr.

However, Dr. Carr didn’t limit the task of saving the Earth to only Howard students.

“We have to be intergenerational, it has to be elders, it has to be children, it has to be everybody in between dedicated to making the change. HBCUs have sister organizations all over the world, particularly in places that are the most vulnerable. We need to be in constant conversation trading techniques that work to advance environmental justice,” said Carr.