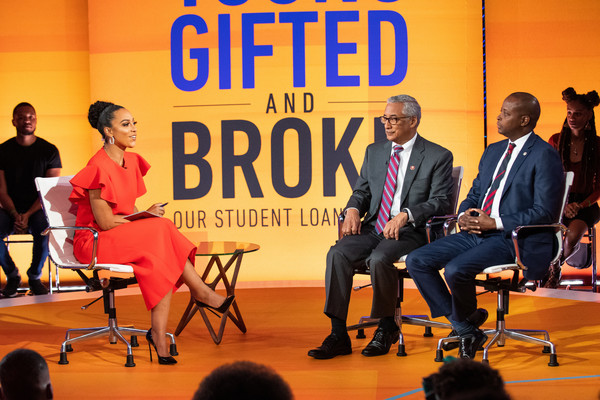 The student loan crisis is one that many Americans know all too well. Studies show that nearly 45 million borrowers have accumulated a total of $1.5 trillion in student loan debt as of 2019. Student loan debt is threatening the financial health of many young professionals, as well as elders who have had their social security retirement checks garnished due to loan debt. The crippling effects of student loan debt are harming many people no matter the age and class.

BET Networks collaborated with Political Strategist Angela Rye on Sept. 10 for a televised town hall about the student debt crisis. The special, titled Young, Gifted, and Broke, was hosted at the Howard University Theatre with students in attendance from Morehouse College, American University, North Carolina A&T, Howard University and many other schools.

In the beginning of the program, students were instructed to raise signs displaying the costs they have accrued in student loan debt. The balances ranged from $20,000 to over $120,000. There is no debate to be had about whether or not the issue of student loan debt is a crisis. Individuals who owe more in loans than they receive in income are hindered from buying the homes they want, investing in businesses, and even starting families.

Congresswoman Ilhan Omar (D-MN), who refers to herself as a member of the “debt generation,” has been working to resolve the student loan debt issue since her journey to Capitol Hill in 2018. Omar has a proposal that would require a simple cancellation of all debt, public and private.

One student in attendance asked why the congresswoman believes in the possibility of cancelling all loan debt when there are people who can afford to pay it off. Rep. Omar responded saying she doesn’t believe loan debt is a “rich people problem” and, although there are some people who can pay it off, most of the people who carry student debt are poor and middle class.

“There has to be a recognition that education is a public good,” said the Minnesota lawmaker, “it doesn’t only benefit me as an individual, it benefits all of us. Around the world, governments invest in education because they see it as an investment in their country.”

Young people are encouraged to get an education to guarantee success, but instead the choice to go to college has called more stress for some. Michael Arceneaux is a New York Times best selling author and a Howard University alum. His next book, titled I don’t want to die poor, speaks to his experience with student loan debt, including how it has affected his mental and spiritual health.

Arceneaux didn’t know much about college prior to attending and decided not to limit his dreams. “[Are we] selfish for daring to think that [we] can dream the way [we] saw black people on TV?” This is the question Arceneaux asked the audience as he assessed his decision to pursue higher education.

As of right now, the responsibility of educating young and motivated students on how federal loans work belongs to no one. Congresswoman Jahana Hayes (D-CT), the 2016 National Teacher of the Year, is disappointed in this norm. “There is a responsibility of our education secretary and our department of education to protect the students, and this administration is not doing that,” said Hayes.

Predatory lending occurs when lenders take advantage of borrowers and find ways to stick them with high fees and interest rates that they know the borrower will not be able to repay. Considering the fact that predatory lending is proven to have caused excessive amounts of student debt, it is difficult for some to understand why the Department of Education has not taken steps to provide more transparency to students.

Predatory private loan servicers frequently prey on people who are more likely to be financially illiterate (i.e., first-generation college students and students of color). More specifically, black students are less likely to have family members who can help them get out of their debt, or even to explain the loan process to them prior to attending college.

Michael Arceneaux, mentioned previously, is an example of this. Arceneaux stated that he has been repaying over $1000 each month since graduating college and still hasn’t made any headway well over a decade later.

The question of why tuition costs are so high still remains. Danielle Douglas-Gabriel, a panelist and Washington Post higher education reporter, believes the problem lies in the loss of regulations around for-profit colleges; some of which have been stripped during the Trump administration.

As chair of the House Committee on Education and Labor, Congressman Bobby Scott (D-VA) has observed discrepancies between the amount of pell grants offered to today’s generation of students compared to prior decades. “Pell grants need to be significantly increased. They used to cover 70 percent for students going to college, now they cover less than 30 percent.”

As the special wrapped up, Howard University President Wayne A.I Frederick took the stage to share how he plans to reduce tuition-related financial burdens for HU students.

Although many students at Howard may feel that they too are victims of the loan crisis and, in some instances, predatory lending, President Frederick assured the audience that the university is taking a pragmatic approach to rectify the collective financial panic.

“We have a tuition rebate program. If you graduate on time, or early, we will give you back 50 percent of the direct cost you paid for the last semester,” said Fredericks, adding that the institution and others like it need to encourage three and four year graduation rates for students.

Angela Rye sat down with The Hilltop and other members of the press after the event. When asked if she believed the solutions for the student loan crisis posed by current presidential candidates were feasible, she stated, “There are so many times in the political landscape where people said things were unfeasible. It’s only not feasible if people don’t want to do it,” she continued, “what I think we have to do is shift the mindset about what we think is realistic.”

When discussing what young black people need to understand about change, she said “Incrementalism has never particularly served black people well. We always have to wait for what serves us, but it’s our 400th year being here. It’s time.”

With thoughts of the future on our minds more than ever, undergraduate and recent graduates can be reassured that we are not alone in our outrage. Whether a teacher or a student, a lawmaker or an attorney, a young professional or an elder; Americans across a variety of occupations and socioeconomic classes can agree that the policies surrounding the costs of furthering one’s education in America urgently need to be re-evaluated.

Advertisement. Scroll to continue reading.
In this article:Latisha Townsend