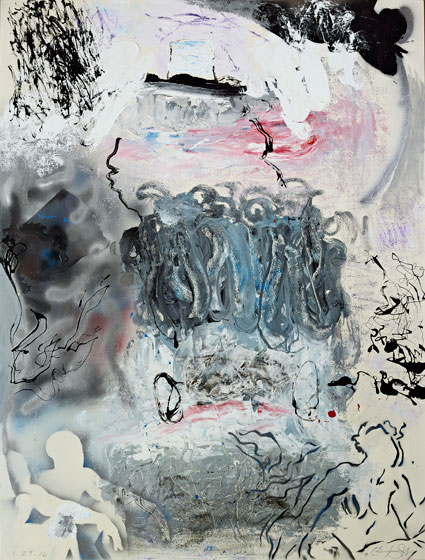 Upon first looking at No. 3, 2016 (1.29.16), I was visually in awe of Jackson’s palette of shimmery silvers, a range of blues and reds and a few moments of lilac. The variety of textures and interactions with light caused by the mix of enamel paint, spray paint and oil based became, for me, the truest expression of life.

Oliver Lee Jackson is an St. Louisianan painter, sculptor and mixed media artist based in Oakland, CA who masterfully creates a multitude of painterly experiences all overlapping and exploding out of the canvas into our senses; comparable to sitting in a restaurant.

All within one scene: A baby is crying, a mother is comforting, someone is loudly ordering, a waitress nonchalantly takes it down. All of these simultaneous events vying for your attention in real life.

Similarly to artist Sylvia Snowden’s desire to capture the glimmer of the soul seen in people’s eyes in her paintings, Jackson’s paintings have the same effect in capturing a glimmer of moment in life with all of its fascinating overlaps. They are worlds of their own. Jackson points his interest when painting to creating images that activate tension for the viewer to engage with.

Another work that particularly struck me was Jackson’s Triptych. This towering piece is created with carefully placed and overlapping pieces of cut felt that jump off the picture plane in a way I have never experienced. Jackson attributes this experience to the intensity of color that felt achieves that no type of paint could ever compare to. The way the light refracts on this material creates color at its strongest intensity.

My eye is trained to move across the picture plane and truly engage with every line, contour and form within the work. Jackson’s work makes this process enjoyably lengthy because there are so many aspects that the eye encounters.

There’s a portion of Beyoncè’s new Netflix release, “Homecoming: A Film by Beyoncè,” where Bey is reprimanding her video crew for not accurately capturing the lively musicality of her performance. She was very adamant about every little sensuous detail that the physical audience would experience  also being translated on video. I make this parallel to Tryptych because there are so many layered interactions that mimic the human experience that Jackson accurately achieves.

The viewer sees several cut out faces and fragmented bodies, in shades of apple green, salmon pink, baby blue, tangerine orange and white, interacting with each other through a jubilant dance across the canvas. They are positioned in different degrees and overlap to create a masterful depth despite the two dimensional plane. There is a sensuality and playfulness that has been compared to a range of art historical giants from Matisse to Kara Walker. However, Matisse’s work looks static and flat as white artistic production generally does when borrowing from African cultures in comparison.

Jackson truly captures that “flash of the spirit” Robert Farris Thompson outlines in his 1983 book of the same name. Jackson’s work encapsulates Alain Locke’s dream for all Black art in linking African practices as an ancestral legacy for African American art making. There is a clear connection to “African retention” as cultural elements that have survived the transatlantic are translated in the contemporary art production of Black artists such as Jackson. Examples of this are books such as “Dogon Statuary” taking residence in his studio, but also in his use of sensual forms in Triptych that visually recall scenes of vibrant and impassioned West African dancing.

Not only was the work of Jackson a breath of fresh air, meeting Oliver Lee Jackson, as an individual, was truly a memorable experience in my life. In an age where Black artistic collectives are declining rapidly in favor of Black artistic superstars, it is easier for the White establishment to pick and choose the Blackness they want to validate and what most fits their narratives. Jackson seemingly lives outside of any expectations others may have for him.

The advice and wisdom he revealed to me within my thirty minutes of meeting him felt akin to getting schooled by some of my favorite Howard art professors like James Phillips and Ron Akili Anderson. The only difference was our location; in a place where Black people were once barred from entry and now are generally relegated to securing the premise. It was a moment for me of truly being seen. A wholesome exchange between two Black individuals; an accomplished elder and budding novice. The experience reminded me of our responsibility to each other to be uplifting and a light to follow in this muddy world.

Oliver Lee Jackson: Recent Paintings will be on view at the National Gallery of Art until September 15.