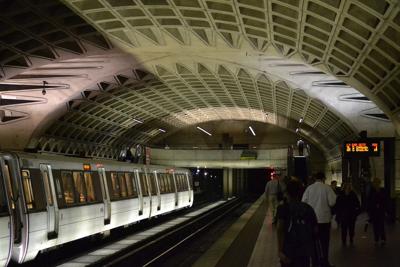 In February 2018, Diamond Rust, a then 20-year old mother of two was severely injured by Metro Transit Police in Southeast D.C. after an officer claimed that she evaded her fare. The photos of Rust’s face and the injuries she sustained that were released after the incident were unsettling to citizens within the District and nationally.

Two months after her arrest,  the charges brought against Rust were dropped and the case was dismissed. She then became the face of the “#ItsNotFare” movement which fought for the decriminalization of fare evasion. Formerly a criminal offense, legislation was passed by the D.C. Council in January that decriminalized fare evasion (an offense that had the possibility of carrying a 10-day jail sentence, a criminal record and upwards to a $300 fine) and lowered the fine to $50. Though Rust has endeavored to change the very offense she was charged with, she’s stated that the personal effects of the event still haunt her to this day.

Yaida Ford, Howard law school alumna and civil rights attorney, is now representing Rust in a civil suit against the officer who injured her. Initially, Ford was set on suing both the officer involved and the Washington Metropolitan Area Transit Authority.  However, she and Rust have hit a crossroads in the case: the WMATA Compact.

The WMATA Compact is the transit authority’s guiding document ratified by Congress, which states that Metro “shall not be liable for any torts occurring in the performance of a governmental function.” The legal term being “ sovereign immunity,” which is held by the Metro police, something that no other police department in the country has. All cases that list the Metro as a defendant are immediately dismissed. There are no organizations higher than the Metro that can be held accountable for public transit situations.

“WMATA is the ceiling. That’s it,” said Ford.

Ford described the Metro as “a unique creature” being that it is set up as a corporation, but ultimately treated as a government agency. The tri-state agency has its own police force and ultimately makes its own rules.

“That brings into question why does WMATA get these privileges that other police forces do not,” said Ford.

She wishes to amend the Compact to allow for the Metro to be held accountable for not only the actions of the officer in Rust’s case but in all cases.

“If Diamond is never able to take advantage of that, then it’s okay. I care about future victims too. I wish I could say that this is the last time that something like this will happen to a black person in the District of Columbia, but it’s not,” said Ford.

Of Rust’s case and the other 20,000 citations issued for fare evasion between February 2016 and February 2018, 90 percent were issued black people, according to The Washington Lawyers’ Committee. This brings into question the fairness of the enforcement of the the law. Ford contributes the statistic to the selective enforcement of fare evasion, which ultimately targets “low-income communities of color.”

“A value is placed upon people based on where they live. There are many external factors that have to be taken into consideration here,” said Ford.

Ford’s ultimate goal is to raise the profile of the situation and bring awareness to the terms of the WMATA Compact. She also wishes for Rust to be compensated for the life-altering circumstances that she has been subject to since the incident last February.

“Unfortunately, in this case, justice is monetized. The extent of Diamond’s psychological and even physical damage is unknown. She will need help for a long time,” said Ford.

The music video is set to premiere May 4.