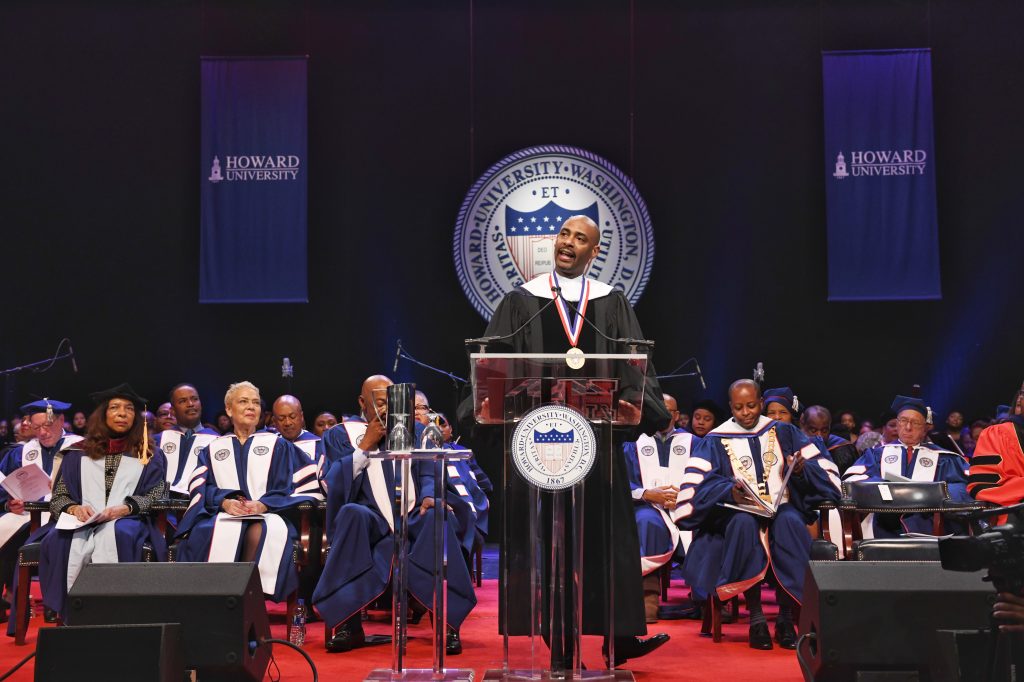 In his opening statement, President Wayne A.I. Frederick reminded the crowd of his mission of attainable goals in the University’s strategic plan, “Howard Forward.”

Following the President’s opening remarks, the Greeting was delivered by the chairman of the Board of Trustees Stacey J. Mobley, Esq.

Charles D. King was selected to serve as the 2019 Charter Day Convocation speaker and be awarded an honorary Doctor of Humane Letters. King is a graduate of Vanderbilt University and Howard University’s School of Law. He is also the founder and CEO of Macro, a top media company representing people of color.

King opened by acknowledging his father and uncle who are both graduates of Howard Medical School, class of 1969. In his speech, King expressed that he first came to Howard with an interest in both civil rights and entertainment. King spoke on his experience on “repeated harassment with law enforcement” as an African-American male and one specific encounter when he was nineteen years old.

“Fortunately, I had every advantage that a young black man could have. I had a great education as well as involved parents with resources. I had the confidence in myself as well as the knowledge to counter their aggression, which kept me and the friend that was with me safe,” King said.

It was through this experience that sparked his interest in civil justice and law. King asserted his view on the incident by proclaiming, “The officer that tried to bury me, didn’t know I was a seed, who became a forest.”

In concluding his speech King encouraged current students to “be ready to fulfill the greatness that has been implanted in you during your time here at Howard.”

at William Morris Endeavor. He was the first African American partner in the company’s 100 year history and the first ever African American partner at a major talent agency. King’s list of notable clients spans every sector of the entertainment industry, including acclaimed filmmakers Ryan Coogler and M. Night Shyamalan, music icons, media moguls and innovators including Prince, Tyler Perry, Oprah Winfrey and Janelle Monae and talent like David Oyelowo.

President Frederick concluded the event by stating that the Board of Trustees has approved bringing back the College of Fine Arts. He then recognized distinguished Alumna Phylicia Rashad, who was in the audience to support King.

The March 1 Charter Day Convocation set the stage for the following evening’s highly-anticipated Charter Day Dinner on March 2. The annual black-tie gala is Howard’s premiere fundraising event. This year, the proceeds from the dinner supported the Student Aid Campaign and its efforts to directly address the gaps that exist in financial aid for Howard students. During the event, the Alumni Award for Distinguished Postgraduate Achievement was presented to Rosie Allen-Herring in the field of business and public service; Lori George Billingsley in the field of communications; and Lt. Governor Boyd K. Rutherford in the field of public service. The Capstone Distinguished Service Award was presented to LaRue V. Barkwell.