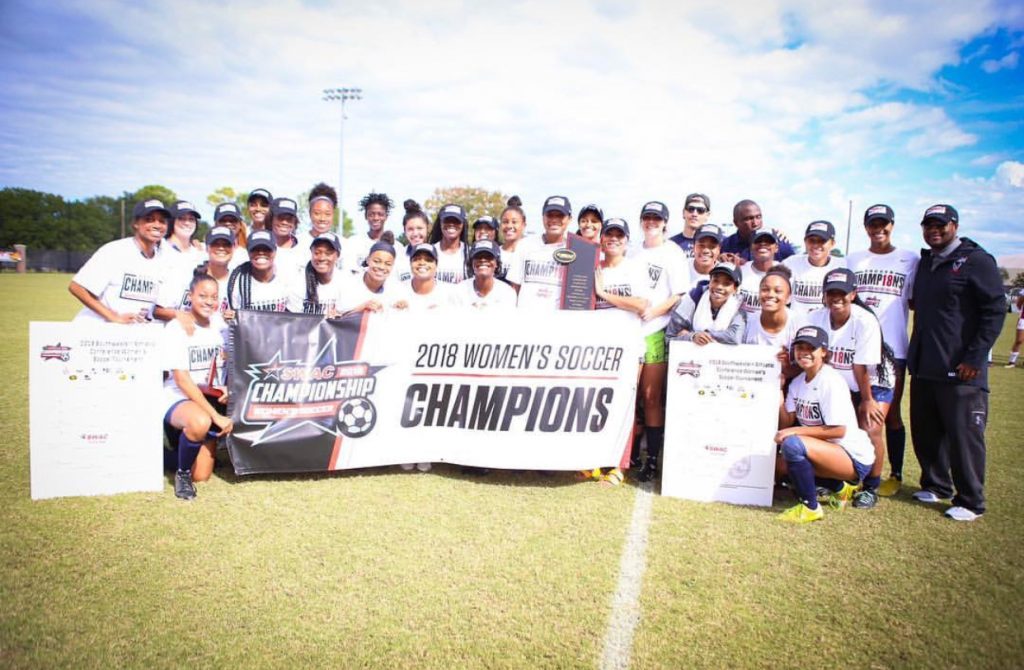 Howard University defeated Grambling State University 1-0 for the 2018 SWAC Women’s Soccer Conference Tournament championship title on Sunday, Nov. 4. The matchup between the Bison, who finished the regular season in second place, and the first place GSU Tigers was highly anticipated.

“Once we found out we were playing Grambling for the championship, the team could not have been more excited.” said senior captain Marley Christian. “After beating Grambling during the regular season, but still finishing second in the conference, we wanted another chance to prove ourselves.”

“For many of us it was our first time ever playing in the conference tournament championship and we definitely let our nerves show at first,” said sophomore Meghan Jones. “We really had to come together as a team in order turn it around in the second half.”

Howard scored the game’s only goal in the fifty-second minute after Freshman of the Year, Jordan Taylor netted a ball assisted by all-tournament team winner, Thalia Boucher.

“The momentum of the game completely changed when we scored,” said Jordan Taylor. “After scoring we were finally able to control and maintain the game for the rest of the half.”

This is the third time the Bison have won the SWAC Conference tournament in the last five years since the team joined the SWAC. Howard’s continuous success in the conference has put a large target on their backs, but the team does not mind.

“We love the pressure and the high expectations that every team in the SWAC has for us,” said senior Dionne Bailey. “We know that every time we play another SWAC team they are going to give us their best fight. I believe that this has prepared us well for the NCAA tournament.”

Howard will play Number 1 seed, the University of North Carolina at Chapel Hill Saturday, Nov. 10 in the first round of the 2018 NCAA College Cup. The Tarheels, who are ranked third in the nation with a record of 17-3-1 will host the 13-6-1 Bison at WakeMed Soccer Park in Cary, North Carolina at 1 p.m.

When asked about their opponent, it is clear that the Lady Bison are up for the challenge.

“UNC has an extraordinary program, but I know we can pull out a win if we stay composed in the back like we did during the tournament,” said Alayah Hightower, junior goalkeeper and second team all-conference winner. “We are one of the most talented teams this program has ever seen. We have the heart, we have the will, and we are ready to compete.”