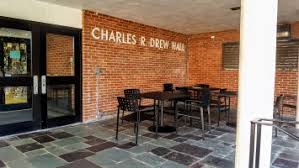 The night of Oct. 24, lightbulbs in Charles Drew Hall were taken out of an elevator and smashed across the third and fifth floors. Subsequently, the residents of Drew lost their visitation for a little over a week.

During this week of no visitation, freshmen took their irritation to Twitter, and the conversation shifted from unjust punishment to the role of visitation in a historical and modern sense. On Oct. 29, Alonté Cuffee, freshman computer science major from Chesapeake, Virginia, tweeted “HBCU visitation policies are anti-black. They perpetuate the notion that blacks need to be policed. That’s all I’m going to say about that today, but stay tuned.”

The tweet gained a lot of attention, not just from the Howard community, but from HBCU students around the country. The tweet received more than 1,000 likes and almost 500 retweets and sparked a discussion nationwide.

It’s a well-known fact that HBCUs have fairly conservative rules when it comes to allowing people in their students’ living quarters, but are visitation policies outright discriminatory?

The Visitation Project, created by Alonté Cuffee, is a research undertaking that is built on the basis that HBCU visitation policies reinforce the notion that Black people need to be policed. It is a database of visitation policies from universities around the country; those numbers will be compared and contrasted to HBCUs. Not only will the results be qualitative, but they will be quantitative by giving each quality aspect a numeric value.

“Most of these institutions were started and funded by white people in the mid to late-nineteenth century, when racism was very rampant,” explained Cuffee. “This is true for Howard University and many other HBCUs. In that, our visitation policies are stricter than our white counterparts at predominately white institutions.The Visitation Project is simply here to prove that.”

“My main goal,” Cuffee explained, “is for people to see that these policies are literally rooted in oppression. Being an HBCU, we’re all about Black Excellence. Knowing that our policies perpetuate multiple stereotypes about black people, what are we going to do?”

Mervin Augustin, community manager of both Drew and Cook Hall, said “It is critical for students to examine the current policy and try to understand why this and other policies have been put in place. It is important for us to promote and maintain a positive, supportive, living and learning environment within each residence hall community and having a visitation policy in place helps to ensure that we are not only doing this, but also providing an appropriate balance between our residents’ academic and social needs.”

While the project has garnered a lot of support, some students are not convinced.

“I just don’t believe that there is enough depth to his argument. Out of all the things that are anti-black, to pick out visitation seems like such a specific and personal issue,” said Glenn Vaulx, a fourth-year architecture student. “As a black person, I’m more likely to be policed when I step off this campus.”

“You can’t place HBCUs in a box. They’re all unique but they have a greater common goal and purpose between those schools and to single out visitation doesn’t seem like he’s grasping the idea of what is pro-black about HBCUs and their students,” Vaulx continued.

Maya Joi, a student at Fisk University, an HBCU in Nashville, also weighed in on the discussion.

“Visitation policies are not about policing. It’s keeping people safe in same-sex dorms, especially ones with community bathrooms, students should be able to be comfortable knowing that there aren’t strangers in the building or randoms at any time of night,” she tweeted.