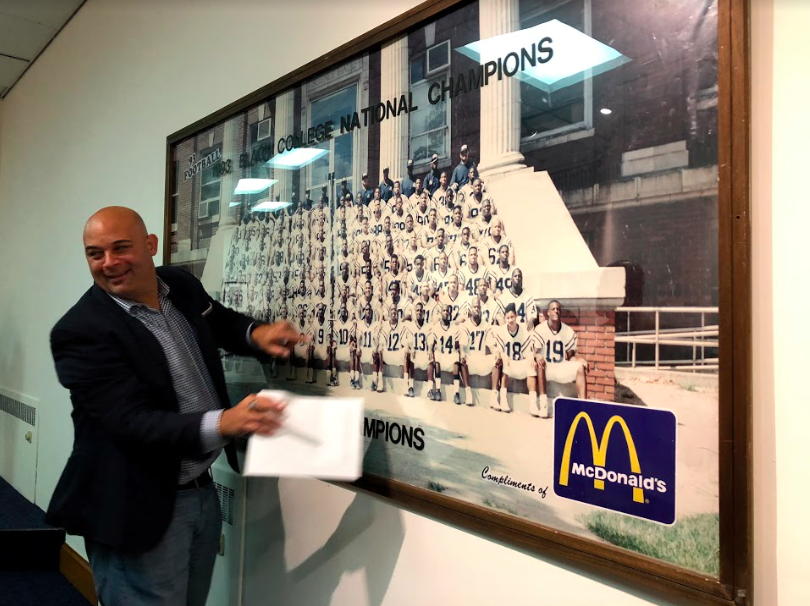 As the Homecoming football game approached, alumni of the football team, former cheerleaders, coaches and friends of the Howard University Athletic department gathered on Thursday to commemorate the 125th anniversary of the football program with the opening of the “Legends and Legacies” exhibit in Founders Library. The university established the program in 1893 under the direction of Charles Cook. The athletic department curated the exhibit, with help from the Moorland-Spingarn Research Center.

The exhibit features artifacts including game-winning footballs, historic uniforms and action shots of the football team, including some taken in the 1950s by prominent African-American photographer Addison Scurlock.

Players from the ‘93 football team, who won both a Black National Championship and a MEAC title, fellowshipped and posed in front of their team photo from that year, which was sponsored by McDonald’s. Charles Bears was on that team.

“It feels good to be a part of Howard and see decades of sportsmanship and people’s accomplishments,” he said. “It [football] basically taught me about life. It taught me how to be responsible, have character, and how to work together as a team to get to the same common goal,” said Bears.

Bruce Williams is the Board chair of Bison Express, the official fundraising arm of Howard Athletics. Williams worked the room, greeting both old and new friends, as he basked in the history he had been a part of. “It’s good to celebrate Howard Athletics and the opportunities it gave people to be champions on the field, as well as [in] life,” he said.

Williams graduated from Howard in 1974, and again in 1976 with a Master’s degree in higher education. He appears in the exhibit in a black and white photo of a one-handed catch during a football game.

However, the football players were not the only athletes honored in the exhibit. Cheerleading uniforms donned a back wall of the exhibit. When the program commenced, alumnae of the cheerleading team performed a slew of cheers, exuding undeniable pride for the university.

Brenda G. Jenkins, the only cheerleader to be inducted into the Bison Athletic Hall of Fame, led the cheers. “Just like they say Black Lives Matter, I think alumni, we matter,” she said. “When we were here, we made our marks through history, and I think we should be honored. It lets us know that what we did was not in vain.”