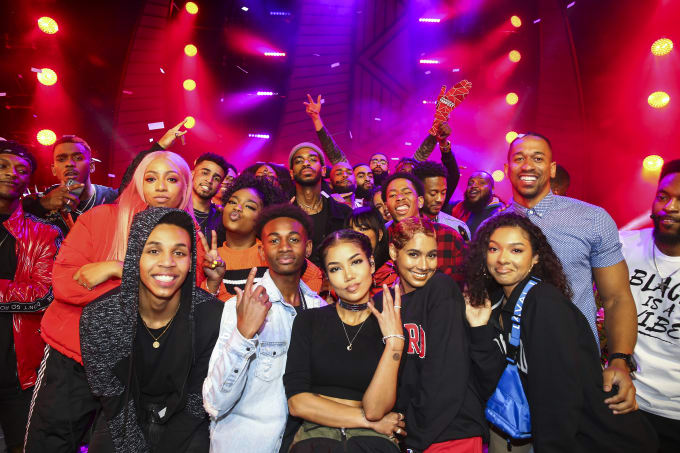 The #YoutubeBlack Fan Fest returned to Howard University for a star-studded lineup Tuesday evening. The event was headlined by neo-soul artist Jhené Aiko and Washington D.C. native Ari Lennox, who is signed to J.Cole’s label, Dreamville.

Some Youtubers offered meet and greet passes to give fans an opportunity to see and experience more than what they would through a computer screen.

An avid YouTube watcher, Rhiannon Rodgers was excited to attend the event. The sophomore won a pass to see couple De’Arra and Ken.

“I wanted to meet De’arra & Ken 4 Life because I have been watching them since I was in high school. It’s kind of like I grew up with them. Their relationship gives me hope that love is actually attainable. They were not what I expected. They were even better. Their energy was really amazing,” Rogers said.

Daniel Caesar headlined last year, bringing in over 1,400 people. Due to the success of the first  #YoutubeBlack Fan Fest during Howard’s homecoming week in 2017, the event is at Howard for a second year.

Sydney Pollock attended the show both years. As a content creator herself, the senior felt a desire to come back.  She has her own blog, The Diary of Simply Syd.

“I think it is inspiring to have a live look at people doing what we aspire to do, especially since we attend a school full of creators who have our own channels and blogs. I was hoping the fest would come back this year! It was honestly one of the best events I went to,” said Pollock.

She enjoyed the original content, as well as the special performances.

“Daniel was amazing and is even better live. Seeing Jhené this year is super exciting. I am looking forward to hearing “Sativa.”

“Sativa” was a hit among the audience. The song featuring Rae Sremmurd had the crowd rushing toward the stage to hear Aiko’s angelic voice. Aiko appreciated the passion many students had for the song as she threw her staged flowers into the audience.

Kyle Exum, a junior at Howard, hosted the red carpet event. The YouTube star has over one million subscribers and views Youtube as a full-time job.  He uses his platform to create comedy sketches, and is starting to move into the nonprofit space. Exum started making six-second sketches on Vine and generated more than 600,000 followers before switching platforms.

As red carpet host, he got a chance to interview the featured talents and entertain the crowd as well.

“It feels like I get the best of both worlds. As a creator it was great to finally meet all these other creators I’ve been watching for so long,” he said. “There was a lot of comedy, dancing, singing, and just a ton of energy all around. It’s a bunch of good spirited people in the same room so I couldn’t see it any other way.”

The event  featured an array of talents that are not normally showcased on their Youtube channels. From comedic sketches to live musical performances, #YoutubeBlack Fan Fest was an event that kept the students’ momentum for the rest of homecoming week.

#YoutubeBlack Fan Fest was sponsored by Twentieth Century Fox and their recently released film “The Hate U Give.”