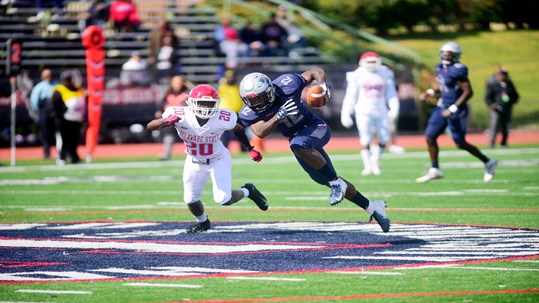 The Bison got straight to the point during their first drive with a 20-yard touchdown pass from quarterback Caylin Newton to running back Jordan Aley.

On their next drive, Newton connected with wide receiver, Jequez Ezzard, for a 78-yard score, keeping the bison in the lead, 14-0.

The Bison kept this winning momentum going as Newton found Izzard again for a 47 -yard touchdown, 23-0.

The momentum from the offense also carried into to second period as the team earned 18 more points, bringing them up by 35 points by the half, 48-6.

Freshman running back Iggy Reynoso took Howard over the 50 point mark with a 4-yard touchdown after halftime.

Ezzard had a show-stopping performance against Delaware State totaling 191 receiving yards on four catches with three touchdowns. He is the first Bison in school history to have back-to- back three touchdown games.

The Bison dropped 50 on Delaware State last year as well.