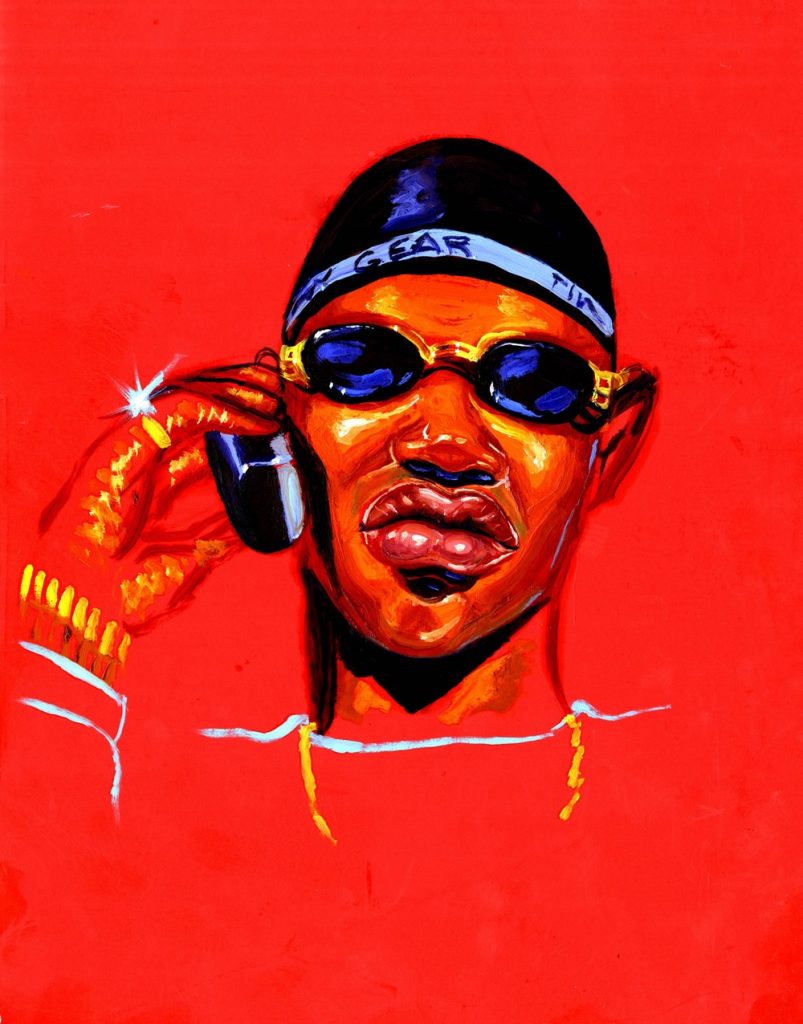 Vivid memories of go-go, early 2000’s streetwear turned fashion, and the parties that surrounded it all describe the environment that artist, Darius Moreno, was raised in. Although classically trained at Duke Ellington High School and Parsons School of Art and Design, his affinity for the ghetto-fabulous shines through in his colorful artwork. In an ever-changing D.C. landscape, Darius Moreno and his work serve as a nostalgic reminder of what once was Chocolate City.

“Being that you recently graduated from Parsons, how well did your classwork reflect your real life interests?”

“Parsons was a great opportunity. But it wasn’t like a lot of black students and stuff. Especially in my major, it was only one other, two other students in illustration. So I would just take a lot of time to work on personal projects. Like the reason for me doing the bare minimum at school was because my teachers didn’t understand my work a lot of times. Like being the only black student in the classroom, they just assume like ‘oh this is different, so unique.’ So they wouldn’t know how to critique it necessarily. I didn’t really take offense to it, I just took it as a way like ‘I could do what I want because you guys can’t check me so.”

“Can you explain the impact that social media has had on your career?

“Uh, social media *laughs*. Honestly like, I hate to say it, but it kinda saved my career in a way because like before I started posting on Instagram, I really started posting on Tumblr. And Tumblr was where I got a lot of notice and reposts and stuff like that, reblogs. So that kind of put my work out there a lot. And then like I didn’t even have a Twitter until like two years ago, foreal. But they like knew all that stuff. ‘Your artwork is all over and stuff.’ And I would see people like make their little icon or avis as like my work or whatever.”

“No, it really is. I’ve encountered your work, like as I was researching for this interview, I encountered like the Lisa Raye image that you did. And I’d seen that on Tumblr like years ago and didn’t even know who it was credited to at the time. “

“Yeah because honestly when I was posting on Tumblr at first, I used to just not even tag my stuff. I was just posting where I could get in. Then I realized I had to like tag my stuff ‘cause I had an incident my first year of school where somebody tried to claim it as their own. So I started making sure I had to like type my name and stuff like that. My first two years, I was just doing a lot of pieces influenced by like movies that are around the culture of hip-hop in general. And just like anything I felt that was like pretty or like themed around things kind of like going unnoticed or nostalgic that were related to me or people like me. Especially being in an environment like Parsons where it just wasn’t a lot of black culture.”

“So how would you define the black aesthetic being that your work is so heavily influenced by it?”

“I would say the black aesthetic is ever-changing. It’s always changing but I also feel like the black aesthetic is the aesthetic that starts it all to be honest. It all starts from where you grew up whether you’re from Georgia, DC, New Orleans, North Carolina. If you grew up in a kinda [impovrished] neighborhood, you have something to say. I feel like a lot of the most popular art comes from the hood. I would describe it as ghetto fabulous. That’s how I would describe it in regards to my own work.”

I prefer to just be an artist, but at the same time, I like being identified as a black artist and a queer artist, you know? ‘Cause that’s what I am, that’s what I represent. Lotta times, I don’t even paint people outside the black community, lotta times to be honest. Like I’ve only done one or two pieces of like white people. And I hated them *laughs*. So yeah, I would definitely identify myself as a black artist, a queer artist. Also, I guess an artist of Hispanic heritage because I do have a Puerto Rican mother.

“How do you feel about white artists getting opportunities over ones that you feel that, given that you’re within the culture, you should have access to in regards to the recent Twitter scandal at the Blacksonian, the National Museum of African American History and Culture, with the white curator for hip-hop?’

“That’s super problematic because like you said, there are many like black curators, I’m sure, would’ve done a better job of like portraying like the hip-hop community in the museum. I don’t necessarily think that it doesn’t have anything to do with them ‘cause like, you can’t base like who can relate to anything based off the color of their skin. At the same time, an opportunity like that, an opportunity that’s huge like that should only be within our own community”

“What led to the dolls that you have recently been making?”

Actually like in school, so I guess three years ago now, I took a 3D class, and we had to make toys or whatever. And everyone in the class had to make different variations of their toys or whatever. And I decided to make like dolls. The teacher didn’t like it at the moment because it was like I didn’t follow the directions. People were making like puppets and stuff like that, and I kinda made like a pole and stripper. It went really well in the end. Like I didn’t really know who I was like creating these for, but on my Instagram, white people really loved it. And I didn’t even realize how much I enjoyed making those dolls. Like taking on a different medium is like refreshing. So yeah. But I really enjoy making toys and dolls, because I was also very influenced by dolls growing up. Like I loved dolls. I loved Barbies, Bratz dolls, the Brandy doll, all that stuff. I loved action figures, still do have action figures.”

“Yeah, have you ever seen the cartoon ‘The PJs’?

“Yes! That’s what they remind me of. If that and Barbie had a baby.”

“Yeah, that’s what I was going for. I really wanna go into stop-motion eventually. Like short films.”

I’m very excited to see what you do with that medium. ‘Cause stop-motion, it’s not used as much as it could be and I think the way that you’re gonna use it is gonna be immaculate.

“Yeah. Yeah like I think stop-motion is definitely under appreciated. Like I really hate how everything is CGI at the moment. So it makes everything look the same after a while. Like some things they should reconsider like especially stop-motion. Like I love films like Coraline, Paranorman, and then like [inaudible], a lot of like Tim Burton’s stuff. So yeah, I love stuff like that. Because it comes off kinda creepy but it’s still really cool to watch”

Yeah, I think we’re so obsessed with the beautiful. It’s kinda nice if they have a little imperfections to them, you know?

Rapid Fire Questions: If you had to have one Lil’ Kim song to open your biopic, what would it be?

Drugs (which is mine too!)

What’s your favorite episode of ‘The Boondocks’

Do you have a favorite Rico Nasty song?

Would you consider DC the south?

Yes, Because I feel like a lot of people in DC appreciate southern music more than like up-north music.

“Lastly, what is something that you miss about the DMV area that’s been lost in the past 5 years?”

“Hm, lost in the past 5 years? Honestly, I don’t even know because I’ve like been to the DMV area. I don’t live there anymore. But I miss things like parties and functions and go-go in general. Like I don’t know even think they’re still really a thing like when I was a kid.”

Artists, like Darius Moreno, Rico Nasty and Goldlink are arguably the last children of the DMV to really have lived the culture at its heights. Through their work, we get a soft glimpse of the ghetto fabulous looks and gogo music that reigned supreme years prior to the gentrification that we see today. We should look to them for the preservation of the culture but also for how we will evolve next.