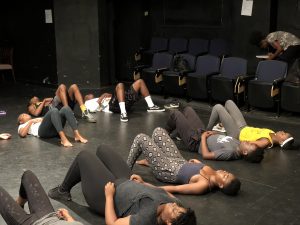 On the evening of Oct. 3, Howard University’s Department of Theatre Arts opened their first show of the season, “Jonkonnu”. Held in the intimate and atmospheric Al Freeman Jr. Environmental Theatre Space in Childers Hall, the cast put on a gorgeous and compelling show.

Before the play began, guests were invited to add a paper leaf with the name of a relative or ancestor to a tree in the theatre space. Already, spectators were being immersed into the theme that would be on display in “Jonkonnu:” Connection to a sacred line.

On a very basic level, “Jonkonnu” is a story about a slave revolt. The slaves on Rodgers’ plantation plot face substantial challenges, and ultimately act on their desires to be free. Though it seems like a story that has been heard before, “Jonkonnu” tells it in a unique way through character and sensory detail. The note from the playwright says that for enslaved people “there was a freedom in leaving the place that weighed them down. But freedom is its own heaviness.”

Though each of the characters have developed personalities and desires, the desire for freedom—for most of the characters—is above all. The story is carried by the cast of strong actors’ convincing character portrayals. As audience members, we root for Winsome, cry for Cuffy, despise Rodgers and cringe whenever Sylvie opens her mouth. While the characters and the plot are captivating, other details make the play truly memorable.

The play was enhanced by scenic details. The use of light (sometimes resembling stars, moonlight or intense sunlight) and sounds made with bottles, hands, and breath create an immersive theatre experience. Dance, music, and aerial arts are prevalent during pivotal moments in the show. Lively dance sequences showcase the titular celebration of “Jonkonnu”. This festival, during the holiday season where slaves had time off, demonstrates the love, joy, and perseverance of enslaved people. Each of these details—sounds, music, dance, lights, etc.—express the show’s emotion in addition to the actors’ portrayals.

There are still opportunities left to see the Theatre Department’s production of “Jonkonnu”. Student tickets are $10, adult tickets are $20, and tickets for faculty, staff, alumni, and senior citizens are $15. Tickets are available in limited quantity online or at the box office. There are evening shows on October 11th and 12th at 8 p.m. The final two shows will be on Oct. 13 at 2:30 and 7:30 p.m.

The Neighborhood Well, a Washington, D.C., faith-based nonprofit, along with a growing team of volunteers, has launched a mobile shower program in Hyattsville, Maryland,...