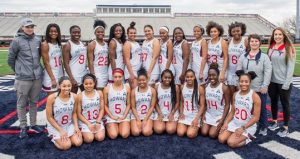 Seeing athletes walk through the yard going or returning from their sports team’s practice is very common on the campus of Howard University and many other HBCU’s .Something, not as common, is the groups of, majority, African Americans walking through the campus with their lacrosse sticks in hand.

According to The Washington Post, 86 percent of college level lacrosse players are white. Sophomores Marquia Walker and Lauren Myers were shared their stories of getting involved with the sport and dealing with the nuances of discrimination in an era where everyone is alleged to welcome diversity. Walker, a chemical engineering major, explained that growing up she didn’t even know what lacrosse was.

“A middle school teacher suggested I try it out,” said Walker.

Myers, a legal communications major, theatre arts and sports management double-minor, shared that her background in lacrosse came from the fact that most of her varsity cheerleading squad members encouraged her to play in high school. Neither Walker nor Myers thought they would be playing at a collegiate level. It was through college camps that Walker realized the possibilities that lacrosse harbored.

“As I matriculated through high school and started attending college camps, I realized that college lacrosse was actually an option; it was also at this time that I realized not many minorities played lacrosse, and that it was a sport dominated by upper, middle class caucasians,” said Walker.

Being the minority in the sport that they are passionate about brought about an onslaught of difficulties.

“Almost every time I step on the field, my team and I are faced with some form of discrimination,” said Meyers. Last year referees described them as, “too aggressive.” The opposing team, however, never seemed to face the same repercussions for similar behavior.

With the heavy political climate involved in social media today it is easy to assume everyone is aiming to be on the right side of history, however that is not always the case.

“Social media taught me that there was a false sense of wanting to ‘diversify the game,’ but the community really wants nothing to do with them [people of color],” Meyers said.With their season quickly approaching, they are choosing optimism and positivity in the face of discrimination.

“Nevertheless, my team and I continue to persevere and play a sport that was not intended for us, yet we are making it so,” said Walker.

The women’s lacrosse team also has an initiative that they would like to implement in store, and conscious efforts are being made to change these struggles through volunteering. These efforts to mend the gap in the lacrosse community will take time, but certainly can be achieved.