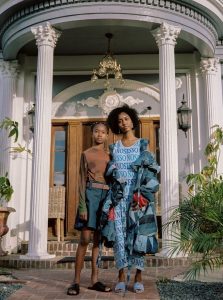 On Friday Oct. 5, I had the privilege of being published in Teen Vogue alongside Halia, my 12-year-old sister and now muse for a fashion shoot combating colorism. A candid conversation with one go my favorite photographers, Zoe Lawerence, about my little sister beginning to endure colorism in school and our own experiences growing up with the matter would become the concept of this empowering project. Amidst the congratulations from my peers and proud sentiments from my family for appearing on such a platform, I was especially elated to be a part of an article provoking a necessary discourse about beauty standards that I had only dreamt of participating in. Though the article itself speaks to the magnitude of representation, I feel the message of the shoot in less exclusively about what’s seen in the media and more vividly about ways to truly see yourself; reflections in both the literal and recounting sense.

Young black girls are particularly affected by the notion of beauty as they grow up grappling with its exclusive standards. These standards are not only propagated by the media, but rehearsed by our peers through micro-agressive attitudes and behaviors that make us question our belonging or adequacy. For instance, the glowing feeling of acceptance I gained from straightening my hair on picture days left me wishing I could trade it permanently for the jokes my hair fuzzy braids afforded during the rest of the year. Especially growing up in predominately white schools, I found it hard not to see my skin as a burden when I understood it was the reason I was never regarded as beautiful by my peers. I spent the entirely of my adolescence shedding the descriptions of “dirt” and “tar” they had attached to my skin and learning to reconstruct my notion of beauty. 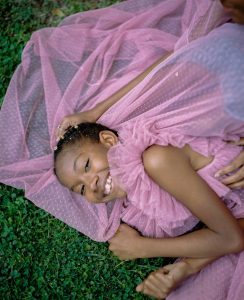 As a big sister, I was excited to see the truth of Halia’s beauty affirmed through this project. Initially unwilling to being dressed up in designer clothes, she was apprehensive about being centered and glamorized for the first time during this impressionable stage of her life. Unsuspecting that the shoot would be published by Teen Vogue myself, I cut my hair that morning and shared the same apprehensions when considering my now natural hair. Even so, Zoe and her team made us feel that we belonged and all throughout hair and makeup that we were easily beautiful as well. This process of sharing experiences accepting ourselves allowed the photoshoot to become something greater than our insecurities and function instead for the purpose or representation. 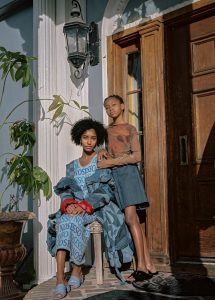 The fashion industry has never quite been the choice synonym for diversity. Since the birth of high fashion publications, the industry has been notorious for not only establishing beauty trends of the time, but its monochromatic use of white muses. That being said, blackness being celebrated on such a popular platform as Teen Vogue helps to expand the spectrum of representation in the industry and inevitably broadens the general definition of beauty. However, being that the author of the article was white, there’s a sort of irony being conveyed in her lack of range to articulate the full purpose of the shoot as it relates to visibility. While the article is centered around the need for dark skin women’s representation in the media, it is truly a testament to being able to actually see ourselves as beautiful rather than seeing ourselves amount other figures in the media. Ironically, being disregarded growing up in white spaces, this traditionally white platform also didn’t quite grasp the nuances of its visibility. Ultimately, these photos became imperative to our growth and a devotion to those learning how to see themselves now that the mirror is not distorted.