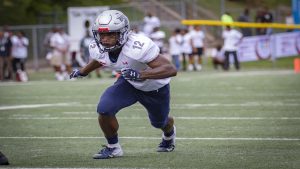 The Howard University football team fell short to North Carolina Central (40-35) in a toe-to- toe match-up Saturday, Oct. 6.The Bison met the Eagles on their turf in a match up that saw over 1,100 yards of combined offense.

The Howard Bison obtained 598 yards of total offense and got on the board first with a 22-yard field goal by freshman Faraji Joseph which was answered by an Eagles touchdown bringing the score 7-3. Sophomore, Saevon Dinkins, sacked the Eagle’s quarterback in the end zone for a safety that helped bridge the gap, 7-5.

In the second quarter the Bison started out strong with a 40-yard touchdown pass from quarterback Caylin Newton to Jequez Ezzard, placing the Bison up at 12-7. The Eagles kept the momentum going with a 35-yard TD pass setting the score at 14-12. HU came right back with a 54-yard pass from Newton to Ezzard, giving the Bison the lead, 19-14. NCCU kept the tit-for-tat match up going with a touchdown bringing the game to a margin of 3, with the Eagles up, 21-19. Right before half time the Eagles snagged a field goal furthering their lead, 24-19,

After halftime the Eagles scored again with a touchdown bringing the score to, 31-19. However, the Bison quickly answered the Eagles with a 75 yard drive by Ezzard, closing the gap a bit at 31-26.

In the beginning of the fourth quarter the Bison played catch up with a 35-yard field goal by Joseph, the longest field goal of his career. Bringing the score within a two point margin, 31-29. The Eagles maintained their lead with a 42 yard field goal bringing the score to 34-29. The Bison stayed in the game with a 19-yard touchdown run from freshman and MEAC’s Rookie Of The Week, Khalid Dorsey bringing the bison up by 5 with a failed two-point attempt. NCCU drove in for the go-ahead touchdown on their final possession, bring thing them up by five, 40-35.

In the last few seconds of the game the Bison drove down to the Eagles own 17 yard line but an unfortunate interception by the Eagles closed in NCCU’s victory.