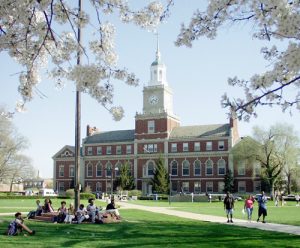 On Wednesday, Sept. 26, HUSA Senate reached an 11-3 vote on the decision to officially add to its constitution an LGBTQ Fund– a piece of legislation that was a combined effort on the part of HUSA’s student advocacy committee and CASCADE. This was just one vote short of the two-thirds majority needed to pass legislation.

The fund aimed to allocate five percent of each council’s budget to support not only long term initiatives but also research and programming for the LGBTQ+ constituents of every council both at the graduate and undergraduate level.

In that shared vision Justin Calhoun, the president of CASCADE and a fellow political science major, aimed to create a “gateway for Howard to be as gay as it is black,” in addition to the fund itself “piloting aid and visibiltiy for LGBTQ students outside of CASCADE.”

One of the senators who voted nay, Autumn Shipman, a 3L at the Howard Law School, expressed concern with the already small budget of the law school.

“Funding is a problem across the board,” said Shipman. “[We must] think of all organizations under the protection of the law school.”

Senator Shipman would have liked to compromise on the percentage so it would not have been such a large impact on the budgets of smaller colleges, especially because the Law School is located twenty minutes away from the main campus of Howard University. This creates a barrier for the LGBTQ students enrolled in the law school, who would likely not participate in any events held on main campus.

Shipman was not the only senator who voted to protect the budget of colleges.

“The smaller colleges who a 5% hit to [their] budget would make operation even more difficult at a university that is strapped for resources,” HUSA senator Dijon Stokes tweeted after the vote.

However, this decision to protect the budget of smaller colleges has personal effects on the LGBTQ students enrolled in those colleges and other colleges. The fund would serve to bridge a gap between LGBTQ students on Howard’s campus and those who were elected to serve them.

Senator Grady expressed frustration with the existing chasm between elected student leaders and the LGBTQ students in their consituency. As an LGBTQ student and one who is involved in politics, they express feeling “tokenized” and noticing a lack of “structural support”. They sought to “change that [lack of structural support from student leaders] and open up the opportunities to more students,” alongside Calhoun.

Senator Grady recognizes that the relationship between the LGBTQ students and their elected leaders has been strained by the vote. They are hopeful and positive the gap can be bridged. Calhoun is keeping a positive attitude as well, hoping the outcome can spur interest and involvement.

“The Howard University Student Association is committed to serving the needs of all LGBTQ+ students. We are willing and ready to create a space for students to voice all concerns pertaining to their experiences on campus, identifying solutions to directly address those concerns and creating tangible change. We acknowledge the sensitive nature of the issue and will ensure there are other opportunities to rectify these issues moving forward,”said HUSA in an official statement.