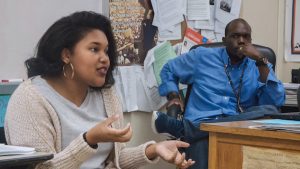 The United States education system is in dire need of revitalization. Starz’s documentary “America to Me” is attempting to strive for just that. The documentary showcases a year in the life of 12 subjects attending high school in Chicago’s western suburbs. The subjects are predominately of African-American descent. The film dissects the students’ experiences as they respectively tackle not only the stresses of teenage years but the achievement gap as well. The achievement gap is defined as the difference in scholastic performance between White and Black students.

One of the film’s subjects is Howard University junior Jada Buford. Buford is a Television and Film major, Afro-American Studies minor from Chicago, Ill. Buford is shown during her senior year at Oak Park and River Forest High School, in a suburb of Chicago.

Critics claim that the film does not accurately represent school administrations’ effort toward closing the performance gap in their communities. However, Buford asserts the purpose of the film is to shed light to the general high school experience for minority and low income kids.

It is no secret the American school system has neglected the stories of those marginalized. The Chicago Public School (CPS) system closed nearly 50 schools in 2013 and five years later are discovering the repercussions. According to researchers from the University of Chicago in the Chicago Sun Times’ “Lessons from Chicago’s Sorry Decision to Close 50 Schools at Once,”  textbooks and other learning materials are just some of the materials lost in the transition for a public school system that serves primarily Black and low income neighborhoods.

Documentaries such as Starz’s “America to Me” have aimed to bring truth to the misalignment of priorities. Buford is a prime example of the future intellectuals to be discovered if students’ voices are placed at the forefront. Having the opportunity to “take back her narrative,” has allowed students such as Buford to be unapologetic in conversations related to race and education.

“A sense of urgency has to be acknowledged when discussing the education of Black kids,” said Buford.