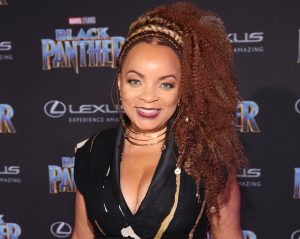 On Sept. 26, the well-known costume designer for black cinema favorites such as Spike Lee’s School Daze, the colorful looks in the hilarious classic B*A*P*S, and Marvel Studios’ Black Panther, Ruth Carter talked about her intricate process in sourcing, researching and developing the looks for each character in the Black Panther world.

Carter discussed her continuous research and development to make the costumes as relevant and significant to actual African tribes and their cultures, as well as referencing the storyline of the comic for authenticity.

Carter continued talking about the process to create Boseman’s suit and Michael B. Jordan’s character Killmonger by sculpting the shape of their suits with clay and contouring for that muscular build to get a “superhero body.”

With the development of the dresses and battle armor for the women of Wakanda, Carter mentioned sourcing real metal and hardware as well as beads from Africa to bring forth for writer and director Ryan Coogler to analyze and approve of.

Carter concluded after explaining all the different tasks and responsibilities of bringing the characters of Black Panther to life that “there’s so many aspects to being a costume designer. There’s many people that you work with, and many processes you have to understand.”