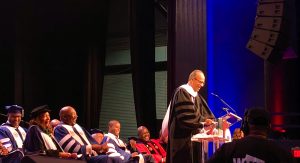 “We have come today to remind everyone of the purpose of higher education,” said President Wayne A.I. Frederick, a triple alumnus of the university. Before introducing Holt, President Frederick provided a list of the university’s academic advancements and strategic hires within the past year.

The university jumped 21 spots on the US News Best Colleges ranking, earning it a spot in the top 100 of more than 1600 four-year colleges that were included. Additionally, the university has implemented a Master’s of Public Health program and an interdisciplinary PhD in higher education leadership and policy studies.

The president closed out his remarks with an urge to students to maintain civility and be open to conflicting viewpoints.

“In this digital age, technology is one of the world’s greatest equalizers. It is the responsibility of this institution to educate people all around the world, particularly the African diaspora, to have the intellectual capacity and knowledge to produce a more just society,” he said.

Holt’s speech echoed the president’s urge. He invited his audience to the Holt dinner table, where he discussed current events and analyzed them critically.

“What I want to talk to you about today is committing to examining not necessarily all sides, but all reasonable sides of an issue; rescuing your critical thinking skills from the clutches of social media,” he said.

Holt continued to discuss ways in which the audience could begin to think on their own.

“News can sometimes put you out of your ideological comfort zone and that’s important. Because you disagree with the premise of a story does not mean it’s not accurate,” he said. He urged listeners to engage in civil conversations with people who disagree with them. The goal, he said, is not to change their minds, but to force them to think critically about their positions.

In a premier institution of higher learning, critical thinking skills produce the accomplishments that the president highlighted in his remarks.

The university’s choice in a Convocation speaker reflected the president’s mission in challenging students to engage with beliefs outside their own, but Frederick said that he and Holt had not coordinated their remarks.

Last year, the university selected former FBI director James Comey, who was met with protests during his remarks, most notably because of his coining of the term, “the Ferguson Effect.” Though Holt is a registered Republican, which differs from a significant amount of Howard students, and black people in general, he was not met with any visible disdain.

“I like how he gave us instructions on how to have and form an opinion without closing off your ears to others’ knowledge, information and also their opinions,” said senior Ayanna Shepherd.