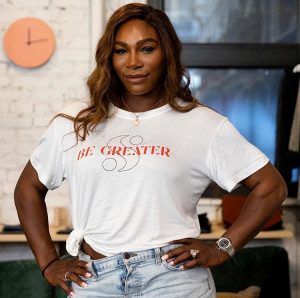 On Sunday Sept. 8, Serena Williams and Naomi Osaka competed in the finals for the U.S Open in New York City. Many tennis fans were excited to view the match between the two powerhouse players, but the match took an unexpected turn after the umpire delivered a series of code violations to Williams for abuse of her racket, coaching and calling the umpire a “thief,” ultimately costing Williams a match.

These are some of the headlines that were used to describe the events that took place at the US Open on Sunday, but are these types of claims about Serena Williams’ attitude anything new?

In 2010, Mary O’Shea wrote “complete female athlete or embarrassment to her code?…Bad winner and even worse loser?” in an article about Williams for Bleacher Report.

In 2015, Chris Chase wrote “Serena Williams is the worst kind of loser — the one who wants to bask in the adulation of an adoring media when she wins, then acts put out when she has to answer to the same press after she loses,”  for USA Today.

Why is what would be called “passion” from other players described as an attitude from Serena?

“It really breaks my heart because… her being a black woman or a woman in sports in general, they give her a very hard time. She gets drug tested more than anybody and she does not get the proper recognition she deserves. The media made it seem like she was an angry black woman. They weren’t unbiased and spun it the wrong way,”  said Alexandria Polk, sophomore media management major and former tennis player.

After receiving various penalties, Williams told umpire, Carlos Ramos, “you will never be on a court with me as long as you live. You are a liar. You owe me an apology. Say it. Say you’re sorry,” while still on the court.

At the French Open last year, Rafael Nadal, one of the top male tennis players, went head to head with Ramos over code violations.

Nadal told Ramos, “you will have to give me a lot of warnings during this game. Give me the warnings you can because you will not referee me any more.”

The articles written about Nadal used similar buzzwords such as “explode” and “blasts umpire”, but the criticism rarely attacked his character like they do Williams’.

“I think [Ramos] was being sexist. I think [Williams] handled it the right way when she was being interviewed. Athletes do tend to get frustrated from time to time, so fining her $17,000 dollars was extreme,” said Kendall Wharton, a senior english major. 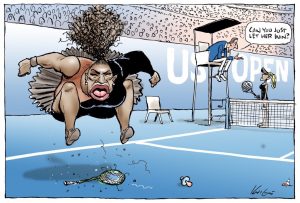 An artist for The Herald sun, Mark Knight, recently released a cartoon depicting both Serena Williams and Naomi Osaka in what many would describe to be a racist way. The cartoon shows Williams drawn in a much bigger physique then her own, jumping angrily on her tennis racket with an enormous set of lips. While the cartoonists severely heightened William’s depiction, he also drastically morphed Osaka’s appearance. Knight drew the Japanese-Haitian Osaka as a lighter-skinned slim woman with blonde hair.

The criticism Williams faces was exasperated recently, as French Open officials banned a Black Panther inspired catsuit she had designed to combat the blood clots she had a life-threatening battle with while giving birth to her daughter. Williams dedicated the suit to “all the moms out there who had a tough recovery from pregnancy,” on her Instagram page. French Tennis Federation President Bernard Giudicelli announced the ban, saying players “must respect the game and the place.”

The treatment and depiction of Serena Williams by mainstream establishments have proven to callous toward the black woman. Williams is undoubtedly one of the greatest athletes of all times, she deserves to be respected as such.