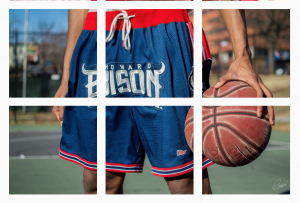 HBCU centered clothing brand Tradition Ever Since has taken social media and the campus of Howard University by storm.From hitting viral numbers on social media, to winning Best Clothing Line at the 2018 Student Choice Awards, the brand has had quite the year.

Preserving the essence and prolonging the legacy of HBCUS is at the core of the brand and has played a large role in the brands success.

Sophomore Tahir Murray acts as the creative director of the family owned business, that has been catching quite the buzz on and off campus. “Tradition is a family business, started about six or seven years ago by my family,” said Murray.

HBCU’s run in their family and the legacy they hold is a big part of the brands initiative.

Legacy, history and pride are some of the pillars of the brand because they represent the strongest attributes of HBCU’s.

“HBCU’s aren’t really represented, not like they should be,” he said. “We want to change that, we want people to be proud of HBCU’s .”

The brand saw an immense amount of growth over the past few months and social media played a huge role in this.

“Celebrities wearing the shorts really gave them an extra push on social media, it all kind of went crazy from there,” Murray said.

Social media has become one of the biggest marketing tools as of late and Murray has definitely used it to the brands advantage. From less than 20 followers on twitter to now almost 8,000 the brand has definitely utilized the social sphere to its benefit.

“I’ll DM celebrities or they’ll DM me, asking for the shorts,” said Murray in regard to the celebrity presence that has also catapulted the brand to viral status.

NFL quarterback Cam Newton posted a picture in the shorts that got almost 70,000 likes. “After the Cam picture everything kind of blew up,” said Murray.

Between having over 20,000 followers on Instagram and consistently being sold out in the Howard bookstore, Tradition Ever Since still continues to grow and thrive.

“My goal is for Tradition to be the face of HBCU culture and apparel,” said Murray.