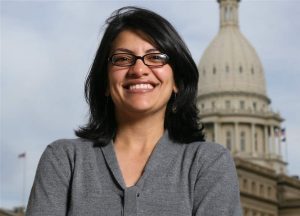 Tlaib currently takes on social justice as an attorney for the Sugar Law Center for Economic & Social Justice in Detroit, Michigan. In conjunction with her time as a community organizer, it is here that she found the inspiration for major legislation which she intends to push once in Congress, called the Justice For All Civil Rights Act.

“Fifty-five years ago, we passed the Civil Rights Act of ‘64 where we were able to show disparate impact, showing the impact of the policy on the ground when it’s implemented, that it’s discriminatory in its practice. Well the courts changed it. Courts and judges got more conservative and they tried to change the interpretation of the act, and that’s what they did,” said Tlaib.

The act intends to keep private corporations, schools and regulated industries from accessing loopholes that deny Americans the opportunity to hold them accountable for discriminatory practices, by proving the impact of the practice even though it appears neutral on paper.

In addition to social justice, Tlaib is on the frontlines of environmental justice. One of Tlaib’s initiatives is her “We Have A Right to Breathe” movement, focusing on ending corporate pollution in Detroit. For Tlaib, environmental injustice in her community is personal. After seeing her father die of cancer at a young age, watching her neighbors get cancer and acquiring evidence of asthma rates increasing, she was pushed into action.

“Here in Southeast Michigan, we’ve got a lot of big polluters getting away with poisoning our community. They think because we’re not the richest communities, and because of the color of our skin, that they can get away with it,” Tlaib said.

In this movement, Tlaib relies on her community to come together and push back against corporate polluters in the city. Even as a state representative, Tlaib found it difficult for state legislatures and corporations to take action and depended on her independent crusade to speak for itself. Tlaib recounts choosing to make a change and “not waiting for the state to finally wake up and understand that this [pollution] is harmful to public health and harmful to the environment.”

As the child of Palestinian immigrants, Tlaib understands that discrimination takes many forms across America. However, she hopes that her election and the election of fellow Muslim sister Ilhan Omar of Minnesota represents the underlying voice of unity amongst the American people.

“I hope that people see this as a tremendous and powerful message. That two Muslim American Women, with very diverse backgrounds, are going to be able to walk on the floor of the United States Congress as members, at a time that is really dark for our country, a time where Islamophobia is at such a high. I was elected by a 60% African-American district and Ilhan represents a 70% white community. We were elected by people who don’t look like us and don’t have the same face as us and that says a lot about the America that we all love,” said Tlaib.

Tlaib hopes her position will empower her Muslim brothers and sisters to no longer stay quiet about injustice that affects themselves or any other marginalized group.

“My fear is that people will be silent. When Trump says Mexicans are racist, I hope we don’t stay silent; when police brutality is at a high and we have a president that might say something that makes it sound like black men are disposable, that we speak up. I hope that my American Muslim community across the nation understands, that when they are talking about my African-American neighbor or my Latino neighbor, they are talking about us too. I truly believe this is a country that is not divided, we are just disconnected,” Tlaib said.