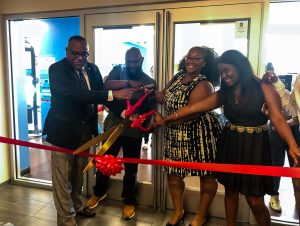 The red ribbon was cut at around 4 p.m. Thursday. Residents immediately flooded into the newly opened facilities. The residents were greeted with complementary healthy snacks and drinks upon entry including smoothie samples and granola bars. 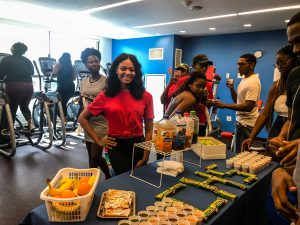 The staff was “planning the opening for some time because they really wanted a space for students to work on their physical health” within the dorm, said Dr. Ellisia Hill, the general manager of College Hall South.

Dr. Hill detailed that the gym would be open seven days per week from 7:30 a.m. to 12 a.m.  Some residents even began working out the moment the gym opened.

Other residents took time to view the new gym and listen in on the results of the prize-filled raffle that took place. The raffle prizes included everything from workout leggings to Bluetooth headphones. Residents who attended the grand opening also received free t-shirts. 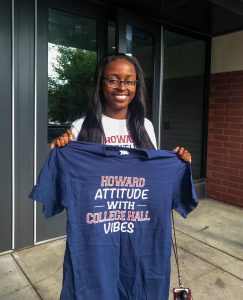 Corinthians Payne, a sophomore economics major, said he did not expect the gym to have so many “high tech” pieces of equipment.

Payne was also surprised that “this many people were excited” about the opening of the gym facilities. The equipment that Payne said he will utilize the most are the treadmill, leg lift, and elliptical machines provided within the gym. Payne also plans to use the gym approximately three to four times a week.

Desiree N., a biology major, said she plans to visit the gym two to three times a week. She plans to use the treadmills and weight machines the most, but “thought it (the gym) would be bigger.”

The gym is a space for students to conquer their fitness goals and is easily accessible to the students living in College Hall.