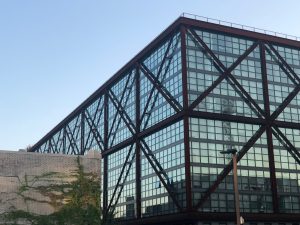 “You want to go to Howard?! Well be careful, baby. You know HU right in the middle of the hood.”

I remember when I first started telling the world about my dreams. The dreams that I cherished made me vulnerable because whenever I let them spill out of my mouth, my visions would constantly be met with negativity. The negative, hateful opinions would constantly stab me in my heart because, deep down, they were true. I vividly remember being a freshman in high school and almost striking Howard off my list of top colleges because I couldn’t possibly go to a college in the hood. No one would ever hire me.

Ignorance was most certainly not bliss. My mind truly thought that my only purpose on this earth was to get hired by “them white folk” and my college choice was one of the biggest determining factors in doing so. They told me Howard was in the hood. They told me not only did the campus entirely encompass black people, but the city around it was Chocolate City. They beat that into my brain there was no importance in existing in a place named Chocolate City. I spent years with that parasite infecting my soul. So, imagine my surprise when I first visited Howard and D.C. in June 2018, years after their claims, only to find that the streets were no longer dipped in chocolate.

Where is this hood they so constantly spoke of? For all of these years, I was frightened to go to a place called Chocolate City, a place where Black culture was so dominant, that it was used as a fear tactic by people close to me. Today, I am educated, and proud of who I am. Therefore, today, I am scared for different reasons. Where has the chocolate melted away to? Where are my people?

I’d seen gentrification before moving to D.C., in Atlanta. As a child, I bore witness to the pale skinned faces swooping down into our communities and pushing us out of our homes only to give us lousy excuses like “dropping crime rates, cleaning the community, and providing more food options.” When I saw three more Starbucks being opened up around the corner from my house, and upon instinct…happy that I didn’t have to travel far to get to Starbucks. However, in my gut, I knew something was definitely up.

At least they still call Atlanta “Black Hollywood” whereas DC is being stripped of its Chocolate City title. Here in D.C., natives who spent their entire lives here now fear that they may never get it back.  Lawsuits have emerged against the District claiming that gentrification has caused the displacement of and discrimination against low income people of color in historic communities. People who were born and raised in DC were swatted away like flies from their homes. And for what? More Starbucks within walking distance? For more sidewalk space for white people to safely walk their overpriced dogs? For outsiders to get a chance to experience “urban” life?

They tell us that gentrification is all about bringing positive change to “damaged communities.” Well, I am telling them that “positive change” doesn’t mean kicking my people out. “Positive change” means an opportunity to give my people the resources which have been kept out of our communities. No matter how bad it may seem or what they might say, we are never too far gone to silence those negative opinions, to speak up about the facts that are damaging our communities and to bring our people back.