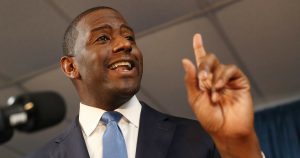 Following a historic upset in Florida’s Democratic gubernatorial primary, Mayor Andrew Gillum became the third African-American candidate this year to clinch a major party nomination for the general gubernatorial elections in November. Gillum joins Rep. Stacey Abrams (D-Ga.) and Ben Jealous (D-Md.) in a quest for office, highlighting the importance of voter turnout and a new strategy among Democrats.

As racial tensions and rejection of establishment grow following the 2016 presidential election, Democratic leaders collectively rushed to find a new strategy to increase voter turnout. This led to the nomination of several new progressives around the country. Along with Abrams and Jealous, Gillum mastered these plans in their campaigns. The new wave of minority politicians winning elections uses grassroots strategies. They are not nearly as embedded in the system as their opponents, but rely mainly on the support of marginalized voters.

All three candidates have run on the support of voter mobility, economic fairness and race and gender issues. They are focusing on voters often ignored in current politics by citing the importance of intersectional outreach in their campaigns.

“Black voters, and particularly black women, are the bedrock of the Democratic Party, and it’s incredibly important that our candidates and policies reflect that in 2018,” a Gillum spokesman told CNN.

This was evident in last year’s special senatorial election in Alabama where black women were credited with the biggest contribution for Democrat Doug Jones’ win over Republican Roy Moore.

Aside from voter turnout, Gillum’s campaign focuses on criminal justice, education and immigration reform. According to his campaign website, he plans to “confront the challenges we’ve shrunk from over the past 20 years: rebuilding our economy, revitalizing public education, protecting and expanding healthcare access, and addressing our climate change crisis with a clean energy economy.” These values are shared among progressives running this fall.

Gillum, Jealous and Abrams are all setting examples for the many aspiring black politicians at Howard University. Freshman political science major Gregory Pugh plans to pursue local politics and municipal court reform in his hometown of Philadelphia.

“These races mean a lot to a young black servant. As one black leader opens the door, others rise up to continue the tradition of leadership above oppression,” says Pugh. “Every time we overcame, we overcame because of unity between black people, white people, Muslims, the LGBT, and immigrant support for the common cause of humanity.”

Given the historical and current politics of America, a win for any black politician is significant. There is a lot at stake. Along with becoming the first black governors of their respective states, Gillum would be the first Democrat to win the Florida Governor’s office in 20 years, and Abrams would be both Georgia’s and the United States’ first black female governor.

The 2018 midterm elections will take place on Nov. 6, where voters will decide who will lead the country locally and nationally for the coming years.