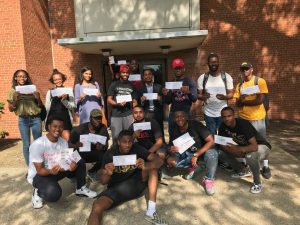 Laughter rings out from afar. When sitting in a classroom in Locke Hall, students at Howard University can hear in the distance, memories of their adolescence. Playful shoves, inside jokes, and eager spirits ready to learn characterize the Howard University Middle School of Mathematics and Science (MS2). Located to the leftof Locke Hall, the Middle School is home to our younger Bison in grades six through eight

As a new year for undergraduates begin, it is imperative to inspire the generation that follows us to achieve academic excellence as well. Marquis Taylor, College of Arts and Sciences Student Council Executive President, understands the importance of giving back to the youth. Taylor is a junior history major and sociology and political science double minor from Brooklyn, New York. As a member of Alpha Phi Alpha Fraternity Inc., Beta Chapter, Taylor and his brothers assisted the Young Africana Leadership Initiative (YALI) and the School of Business Student Council (NeXt Edition) in a cheerline for the middle school students August 20, 2018.

With an idea sparked by Howard University junior Eathyn Edwards, volunteers arrived on the scene with nearly 200 cards encouraging the students to reach their full potentials. Edwards is a computer Information Systems major from Pennsylvania and currently serves as the Executive Vice President of the School of Business Student Council. The children’s smiles and laughter were telling indicators of the cheerline’s impact.

“Howard University is  here to remind our younger Bison we are here for them,” Taylor said. With these last few words, he encourages his peers to speak to the young boys and girls in passing. We were once them and they are our future.