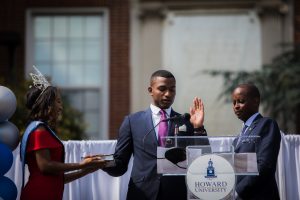 Howard University Student Association (HUSA) kicked off the year with its 58th Annual Inauguration Sunday, August 19 and it was a Howard affair  through and through. The inauguration began promptly at 3 p.m. in the Lower Quadrangle.

The program proceeded with a rendition of “Lift Every Voice,” better known as the “black National Anthem” from the Howard Gospel Choir,  followed by speeches delivered by newly appointed members of the appointed executive office and trustee, and speeches from esteemed members of our administration.

The ceremony celebrated and acknowledged the efforts and accomplishments of elected officials and the newly crowned members of the Royal Court. The Lower Quadrangle, affectionately known as the valley, has been a deeply connected part of Howard culture and to have such an important event held in it contributed to students’ pride in a Howard culture many felt had faded.

Chamille Boyd, a senior in the Howard gospel choir, felt a that pride deeply- pride in her classmates’ ability to lead and represent their constituents and pride in Howard University itself. Boyd felt the symbolism of the venue and the musical selection performed by the Howard Gospel Choir set forth a tone of inspiration and unity.

Unity was also a mainstay in the speeches delivered throughout the inauguration. Elected student leaders were reminded by President Wayne Frederick to lean on each other and seek community with one another when needed, as the journey of a student leader is not one to be braved alone.

President Frederick’s speech contained a poignant quote on the topic. During his time at the podium, he reminded student leaders who sat poised and eager to begin their term as member of HUSA, many for the first time, “If you want to go quickly, go alone. If you want to go far, go together.”

Each elected official swore an oath to “strive for the unity of all people of color around the globe.” The inauguration created a platform to move toward a greater collective effort for truth and service for both elected officials and the students they represent.

To some Howard students that message of unity came with apprehension. Justin Calhoun, the president of CASCADE and a student leader in his own right, did not resonate with the message of unity as deeply as he had hoped. He wishes to remain optimistic about the upcoming year and but he is, “very apprehensive because year after year [they] don’t do all that was promised during the campaign.”

His reservations are rooted in experiences with former councils who he felt were not intentional in their service to LGBT and queer students. Their political efforts often excluded the LGBT+ student body in their vision of unity and inclusion on Howard’s campus, he said. Calhoun is hopeful that the new HUSA elects will deliver on their campaign promises. He hopes that this sense of unity will resonate beyond the inauguration and that student leaders will recognize their role in correcting a legacy of exclusion on Howard’s campus.

One newly inaugurated senator shares Calhoun’s concerns but has a more upbeat outlook on the inauguration and what it means going forward. Alexis Grady is a junior political science and economics double major and was elected to serve as a member of the COAS Senate. As a nonbinary individual they felt a sense of honor and pride at being inaugurated, a chance to be recognized for their hard work and effort, and paradoxically isolated as the speakers used binaristic and gendered terms throughout.

However, Grady is excited to be in the position to exact change as a part of HUSA that allows queer issues to become a more pressing concern. They are hopeful and positive about turning the message of unity and community into one that rings true for all Howard students.