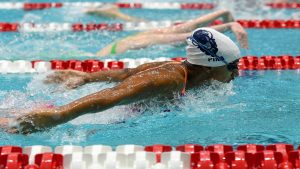 The only pool in Cape Verde is currently under re-construction which limits how many people are able to get into swimming competitively.

Despite the lack of resources, competing with her siblings wasn’t something Pina deemed improbable.

“It’s not far-fetched, three members of one family all going to the World Championships and the Olympic Games,” said Pina to The Sun Chronicle. She does, however, admit that competing in the Olympics will be different from her past competitions.

“We’re not just swimming for our colleges or schools, but for a nation so we want to do our best.”

This mindset is what has led the 2017-18 season Bison Of The Month to not only the olympics but to a prestigious list of accolades expanding beyond the pool.

The sky is truly the limit for Pina and her dedication to excellence in every capacity has not been in vain.

Howard University is currently the only HBCU to have both a men’s and women’s swim team. Coach Askew and the Bison begin their 2018-19 season in September. The 2020 Summer Olympics in Tokyo, Japan begins Friday, July 24, 2020 through Sunday, Aug. 9, 2020.