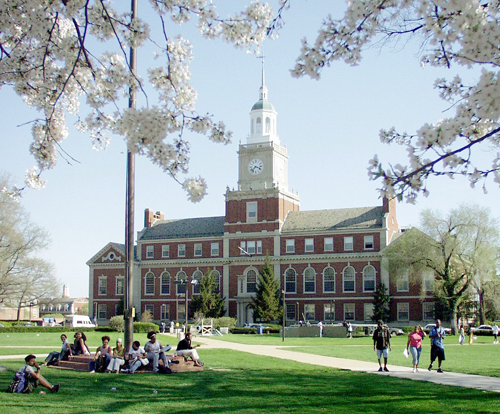 When the blockbuster Black Panther came out in February, it took no time for people to start referring to Howard as the “real Wakanda.” As students, most of us snarked. In February, undergraduate students were experiencing infrastructure disasters and administrative shortcomings that made Howard seem far from even being the Real HU, let alone the real Wakanda.

With the announcement of Howard alum Chadwick Boseman, who plays Marvel’s Wakandan superhero the Black Panther, as the 2018 commencement speaker, it was no surprise when this debate of whether or not Howard is comparable to Wakanda sprang up again. Months later the fact remains that even those of us who love Howard the most criticize her harshly and recognize that by many counts she is not Wakanda. Howard is not the most technically advanced, financially stable or administratively sound—characteristics which define the Black utopia that Wakanda is. So obviously, on the surface, it’s easy to laugh off the idea by these comparisons. But these aren’t the comparisons that matter, because these aren’t the qualities that really make us love Wakanda.

We love Wakanda because it’s about constant advancement and striving for the best. Not keeping up with whiteness or proving ourselves to the world, but improving upon ourselves for ourselves. Wakanda is about being the best already, but pushing for better anyways. In many ways, the same is true about Howard. As we strive for excellence, we often refute our likening to “the Black Harvard,” or other white-washed comparative ideals. At Howard, Black people want to improve from within, for those within. Like Wakanda, Howard of course takes into account all that is happening in the outside world, but it then recontextualizes that information for what it means to us. While Howard is not a bubble, it is a center. A cornerstone for Black culture and Black intellectualism, and a critical intersection of perspective.

Which leads to another reason why we love Wakanda. While Wakanda centers blackness, there is still space for every type of person. Varying backgrounds, ethnic groups, religions and ideologies all coexist. Just like Wakanda, Howard embodies diversity in seemingly monolithic groups. Rich with cultural diversity, the Mecca is the intellectual crossroad for Black people from throughout the diaspora. Just like Wakanda, there are different ideologies on what’s best for us as Bison and what’s best for us as Black people. And just like in Wakanda, there are power struggles between these different ideologists. The beauty of it is the allowance for so many types of blackness to thrive in the same space; the millions of different conversations that have happened within the walls of Founders Library or under the shade of trees in the valley. The millions of ways we’ve idealized, discussed or debated what it could and should mean to be black.

Which is what we all love most of all about Wakanda. The great “what if.” What if Black people were left alone; left to mine our resources, cultivate our cultures and live our lives outside of the influence of whiteness? What if there was no colonization, no imperialism, no racism determining Black fate? What if our fate was in our own hands? Wakanda, symbolically, is the full extent of Black excellence with no interference from powers meant to keep us down. Similarly, Howard is our real-life “what if.” Howard gives us the opportunity to think beyond and outside of all that restricts, marginalizes and oppresses Black people. It allows us the chance to ask “what if” again and again; to reimagine our destiny; to rewrite our story; to decide the course of our lives for ourselves. Howard,  for many of us, is our only chance to see what life outside of repressive whiteness is like. Howard, for many of us, is our only chance, period.

It is in these ways—the ways that really matter—that Wakanda mirrors Howard. Maybe not Howard the institution, but certainly Howard the Mecca. If not structurally, then culturally. Wakanda is not so much about who we are now, but who we strive to be in another 150 years. Whether or not Howard is Wakanda is a question of legacy, therefore Howard’s next step must be the same as Wakanda’s: Broadening its impact and more deliberately reaching out to the communities around us. The next step is to be sharing resources to elevate our collective wealth in knowledge and finances. This is the upcoming challenge of our legacy—spreading truth and service even further throughout the world. This is the only way to ensure an enduring cultural impact from the Bison community. It’s the only way to guarantee that it really is Howard forever.